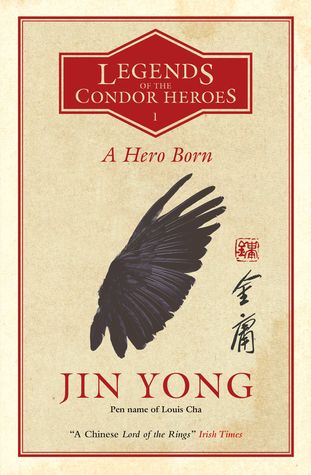 We are in China in the 13th Century. The Song Empire has been invaded and half its capital city are in the hands of the enemy Jurchen. In Mongolia, a powerful warlord is uniting a nation of warriors and soon the warlords name will be known everywhere: Genghis Khan.

But our focus here is on Guo Jing, the son of a Song patriot who grew up in Khan’s army. Jing is a rather unassuming young man – he quietly does what he’s asked to do and he’s loyal to his commander. He would probably go unnoticed in life except for one important thing: he has been fated since birth to one day confront a man who is his exact opposite in every way.

Jing is trained by masters (“shifus”) with incredible skills and foresight.  They are collectively known as The Seven Heroes of the South, though most think they are only a myth. The shifus will guide Jing from the Mongolian steppes to The Garden of the Drunken Immortals to fulfill his destiny.

I really liked this book.

It’s been decades since I’ve read much Chinese literature, but I’ve long enjoyed the narrative of this culture. This book is a fantasy/adventure mashed-up with classic low-budget, Chinese kung fu movies. It is nearly constant excitement but we never lose sight of the character or the story.

This was quick and easy to read, which frankly surprised me.  I attribute this in large part to the translation from Anna Holmwood. Even though author Jin Yong carefully describes some of the martial arts poses and moves, which if you told me he would do this I would suspect it would slow down the reading, it actually heightened my anticipation of the fight and my ability to picture what was happening.

Since reading this I’ve seen the term “wuxia” to describe this genre, which means “martial arts and chivalry,” and this is a perfect description of this book, and something I’m very much interested in reading more.

Looking for a good book? Perhaps not for everyone, but if you enjoy adventurous fantasy and/or ‘B’ kung fu movies, you should really enjoy A Hero Born by Jin Yong, translated by Anna Holmwood.

series: Legends of the Condor Heroes #1)