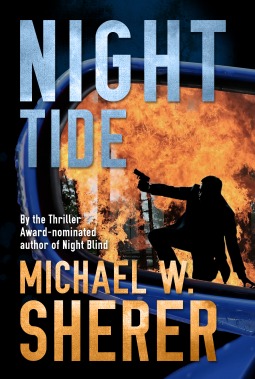 I haven’t read too many action/adventure books, but mostly because I am not familiar enough with the genre to know what’s out there and worth digging in to. With that in mind I thought I’d give this a shot.
Blake Sanders is our hero in this, the second book in a ‘Blake Sanders Thrillers’ series, and this book digs into his past. Some 20+ years earlier, Sanders’ best friend, Perry Langford was arrested and found guilty for the murder of a young woman who died in an explosion at a university lab explosion in Illinois. Perry always claimed his innocence, but this isn’t unusual of course, and Blake, who was there at the time, doesn’t know the whether his friend was guilty or not.
Now, 20 years later, Perry is out of prison and he’s vowed vengeance against all those he believes are responsible for his time in jail, include Blake. And so begins a wild ride, with Blake in the center of the action.
Except…
It’s really not that wild.
The story, the action, the history, the goals … everything is over-explained.  It is hard to get the sense of an action/thriller when you’re bogged down with prose.  Sometimes it’s author Michael W. Sherer being flowery with his language and sometimes  he decides we need to know more than we really do.
The character of Blake Sanders was not at all interesting. Considering that this was a book in which we were supposed to get some background story on our main character I really didn’t feel I learned anything of value about him. It’s certainly possible that, being the second book in the series, I’ve missed a significant part of the character building from the first book which might have made me care more for him.  Maybe.
It took me a long time to read this book because I kept avoiding it.  I’d read for awhile, get bored, put it away and then intentionally not read it for a bit.  Then I’d pick it up again, go back a chapter or two to remind myself what happening, read for a bit, get bored, then put it away for awhile.
This is most definitely not a book I’d recommend.
Looking for a good book? Michael W. Sherer’s Night Tide, the second book in the Blake Sanders Series, is much too slow to be the captivating read you might be looking for.