Posted by Daniel on March 29, 2021
Posted in: ENTERTAINMENT, YA. Tagged: 3 Stars, Entertainment, YA. Leave a comment 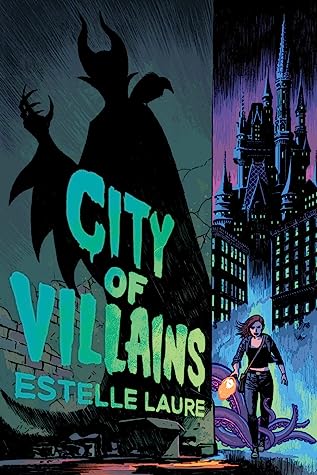 In addition to being a high school senior, with all that entails, Mary Elizabeth Heart is also an intern at the Monarch City Police Department. She delights in meeting all the detectives as they check in and rush off to help clean up the city. For years there has been a deep divide between the city’s elite and a section known as The Scar (which the elite have been wanting to develop. The Scar has been the center of the city’s magic.
When Mary’s friend Ursula is reported missing, the Chief of Police invites Mary to join the team of detectives searching for her. Her first real investigative case! But the deeper Mary gets into her search, the more unusual things she uncovers. There’s a girl with a head of horns and a sea monster living in a poisoned lake. And all through her search she comes between those wanting to shut the Scar down and those who will do anything to get back the magic that was once so prevalent.
I have a number of reactions to this book.  The first being: Why?  Why do we need to invent, or reinvent, the origins of famous Disney villains? These origins take on a modern twist which ultimately changes the nature of the films in which they became so iconic.  So, why?  Of course the question is a bit hypothetical.  The answer is “to sell books, to make more money for a corporation.”  Not a very sexy answer, but likely (I’m guessing) the honest answer.
My next reaction is: Whoa, I didn’t realize this was going to be so classically a YA-style novel. What I mean here is that this takes on the tone of a YA novel full of pathos and angst.  Think of books by authors like Laurie Halse Anderson, Stacey R. Campbell, Danielle L. Jensen, or even Maggie Stiefvater. These books tend to have a “woe is me” attitude and everything and everyone is against the main protagonist.  I am generally not a fan of this type of YA fiction.
And my third reaction (which came in pretty much this order), was that I liked the basic story. If these were unique characters, I’d be really interested in seeing where the story was going.  Knowing ahead of time that these were going to turn out to be Disney villains, some of the mystery and the magic (pun intended) was gone.
Author Estelle Laure’s writing is quite good and the development of the stry is solid.  If it weren’t for the angst-y attitude, and the fact that we’re changing up or unnecessarily adding back story to established characters, I’d probably really enjoy and recommend this. Even so, I think it will do well with the intended audience (young readers, not some old male reviewer).
Looking for a good book?  City of Villains by Estelle Laure puts a dark twist into the creation of  some of Disney’s iconic villains.  If you don’t mind the idea of reimagining an established character, you might enjoy this book.