MADE IN CHINA – Amelia Pang 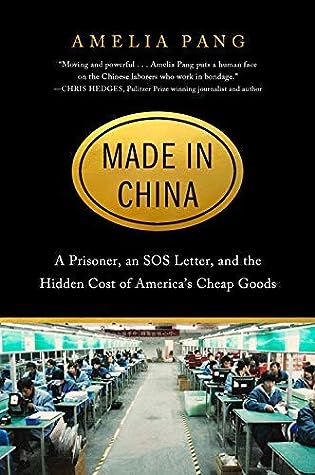 Most of us in the Western world know that out of respect for the United States we shouldn’t but products made in China. But our reasons probably differ slightly. We’ve likely heard that Chinese workers earn a substantially low wage and they work long hours, which is how China can undercut other countries and their exports. And it’s possible … possible … that we’ve heard the term “slave labor” in connection with the Chinese work force.  But what does that even mean?

In 2012, a woman in Oregon opened a cheap Halloween headstone decoration that had been purchased at K-Mart. But inside the packaging was a letter – a plea for help – from a Chinese prisoner forced to make and package the cheap, strange decoration.  The letter is written in both Chinese and broken English.

Feeling the need to do something, the woman reported the note to a local newspaper, and to Human Rights Watch, the United Nations Human Rights Council, and Anti-Slavery International. Getting a response was not quite so easy.

Enter investigative journalist, Amelia Pang. Amelia proves she has the resources and the tenacity to dig deep into the story.

Through a great deal of work, Pang uncovers the name of the prisoner who wrote the note (she identifies him by using a pseudonym) and tells his remarkable story of a very bright man holding tight to his religious belief. Unfortunately, his religious thoughts are contrary to the official Chinese stance and so he’s sent to a prison for ‘reform.’  His prison is a well-known facility for providing labor for a wide variety of products.  There are no protections for prisoners (no masks or goggles or any kind of gear that any other worker in the world might have provided) and the expectations – the required goals – for prisoners is unrealistic. Most prisoners get about three hours of sleep at night because it’s the only way to meet their daily goals.

Pang gives us the in-depth story of this particular prisoner, his refusal to spout the Party religion, his punishment – pushed to near death, his ultimate release, and his harsh, brief life after. But she also gives us the broader story. We hear similar stories from other survivors (not surprisingly, it’s all the same for women prisoners, plus continued gang rape) and even get a peek at the idea of selling body parts.

This is not an easy book to read.  It is horrifying.  it is reminiscent of the stories we heard coming out of Nazi Germany after WWII, except that this is now.  This is going on in our lifetime, and it is being encouraged by us!

Although China hasn’t gone to great lengths to hide these prison ‘reform’ camps acting as slave labor for industry, they have done just enough to make it difficult to track or prove and so, while most large corporations unofficially know that the Chinese labor making their products might be shopped out to these camps, they don’t look too hard and can justify using Chinese labor.

While shopping this Christmas there were times I picked up an item, saw the “Made in China” label and thought to myself, “I don’t really need this stocking stuffer” and put it back.  Did it make me feel better?  A little. Did it make a difference?  Probably not.  But if enough people think the same way….

The book is an excellent bit of research and writing.  It will make people uncomfortable and therefore many won’t even read it, but for those who prefer to be informed, this is a must read.

Looking for a good book? Made in China by Amelia Pang it is a tough, thorough look at Chinese slave labor and how we support it with our own shopping habits.

Made in China: A Prisoner, an SOS Letter, and the Hidden Cost of America’s Cheap Goods