A TEST OF COURAGE – Justina Ireland

Posted by Daniel on January 25, 2021
Posted in: CHILDREN'S, SF/FANTASY, YA. Tagged: Children's Books, Entertainment, science fiction, YA. Leave a comment 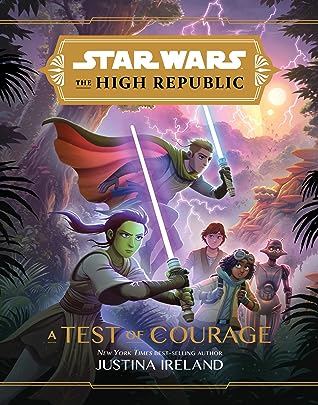 I am all in favor of anything that will get school-aged kids to read.  Books based on a popular television or movie franchise are a great way to get kids reading, and is there any better franchise out there right now than the Disney-owned Star Wars series?

There’s a new space station about to be commissioned and there will be many high-level dignitaries arriving for the dedication.  A ship on the way to the ceremony experiences catastrophic explosions, ripping the ship apart. Fortunately, a maintenance in the area is able to rescue the passengers and they are able limp along to a habitable moon while they wait for rescue.  But is the moon already inhabited?  Are there unknown dangers?

Teen Jedi, Vernestra, is among the survivors.  She is currently charged with protecting her padawan, a young inventor (Avon Starros) and J-8, Starros’s unusual droid.  The two will face a number of tests, challenging the youth to stay the course and trust in the Force.

The writing is crisp and there’s plenty of intrigue and action to keep young readers engaged. And having our protagonist a young girl is a sure-fire way to get all genders of young readers interested.

I’m not particularly well-versed in the Star Wars world but I know that there are many dedicated fans who know all about and regularly discuss (argue) Star Wars canon. In fact, I don’t much care one way or the other what is ‘canon’ – I just want to read a good story.  But knowing just the little I do about this world, I have to wonder about the idea of having a fifteen or sixteen year old Jedi Knight. Not as a padawan, but a full-fledged Jedi. Great for selling books and maybe even a Disney television show, but as part of their ‘official canon’?

As a book, this works just fine.  This doesn’t have to be set in the Star Wars universe – this could be any teenage sci-fi hero.  We get plenty of teen concerns – doubts about their own abilities and trying to find their way in an adult world while still struggling with the awkwardness of coming out of childhood.

How this fits in the Star Wars: High Republic universe, I have no idea, but that’s not part of my milieu.

Looking for a good book? A Test of Courage by Justina Ireland is a good middle-grade sci-fi adventure book that happens to be set in the Star Wars High Republic universe.

A Test of Courage