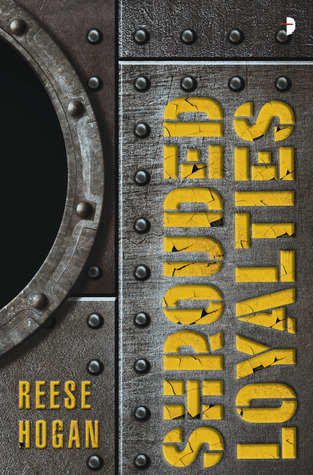 Mila Blackwood is a Naval officer with a secret … she, and others of her country, know how to ‘shroud.’ Shrouding is the ability to travel around the planet in a matter of seconds by using alternate realities. This is useful because Mila and her countrymen are currently at war and there are enemies everywhere.

Mila captains a submarine which has been infiltrated by an enemy (‘Dhavnak’) agent. And when she and another sailor are identified as having unique abilities that could alter the outcome of the war, they become specific targets.

When the knowledge of her unique ability comes to light, scientists on her own side require Mila to submit to a battery of tests, some which have her recognizing that her own side doesn’t trust her.  Where should she direct her loyalty? Her younger brother has already switched loyalties. For the moment, the only one she trusts is herself.

This book was incredibly …. eh.

There is a promise of military science fiction, some temporal/alternate reality shifting fantasy, and some solid action/adventure.  But there is no follow-through on any of these promises.  The biggest problem, though, is the lack of distinguishing characters.

Mila is clearly our protagonist and she’s about as bland as a protagonist can be and still carry a story.  There are moments when she shines and we almost like her, but she quickly closes up and we never really get to know her enough to care about her success or failure.

The other characters in the book…?  They could be one person for all we get from them.

The book redeems itself (slightly) in the last portion (not quite a quarter) of the book as author Reese Hogan pulls the story together.  It’s a bit too little and too late to make this a recommended read, but it does pull this up from a 2-star review to a 2.5-star review (which is then rounded up on sites like Goodreads). I will not be looking to read any other books by Hogan, based on this.

Looking for a good book? If you can get to the end of Shrouded Loyalties by Reese Hogan you might find some enjoyment in the book, but a lack of characterization will make the going tough.