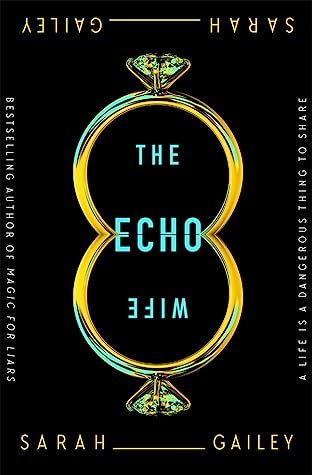 Evelyn Caldwell is an award-winning genetics researcher.  A strong, motivated women, she is surprised when one morning she receives a phone call from a woman named Martine asking for Evelyn’s help.  Evelyn’s husband, Nathan, is bleeding out in Martine’s kitchen.  Martine, Evelyn learns, is Nathan’s mistress.  So why would she call Evelyn for help?

Martine is a clone.  Of Evelyn.  She is a direct result of Evelyn’s genetics research. But she was not created by Evelyn.

Martine is a patient, gentle, obedient version of Evelyn … characteristics Evelyn would never subscribe to … created by Nathan, using Evelyn’s research.  And she wasn’t the first.

Now the Caldwell women will work as one to clean up the mess that was Nathan. But if caught, who will take the fall for Nathan’s murder?

While the book has a strong science fiction component to it, this is more of a revenge thriller than sci-fi novel.

Author Sarah Gailey does a nice job of making the cloning aspects seem realistic and credible without getting to technical.  A few aspects necessary for understanding Martine’s development are comfortably explained.

The story unfolds through Evelyn’s point of view.  This allows the reader to make the discoveries as Evelyn makes them, and it gives us Evelyn’s reactions and emotions, much more intimately, to what she discovers along the way. An emotional response is important in a thriller.

The book has a measured, steady pace to it which is not something I would typically attribute to a thriller.  This isn’t a page-turning “what will happen next” story.  Instead it’s more of a psychological analysis of betrayal and revenge, steadily revealing new aspects.

The writing is solid and it’s easy to fall into Gailey’s prose.  It is a book that is easy to reach for when you sit down to read, because the writing is comfortable and the story interesting enough to hold interest.

Is it a thriller?  Is it suspense?  Is it science fiction? It is all three (due to the elements in the fiction) and it is none. While the story doesn’t exist without each of the elements, combined they present more of a psychological character study of Evelyn than anything else.  And this is just a tad disappointing.  I kept waiting for something exciting, something big.  We sort of get it with a certain discovery later in the book (I don’t want to give too much away here), but it’s not quite the “thrill-ride” that is hyped by the publisher.

Looking for a good book? The Echo Wife by Sarah Gailey is a well written suspenseful sci-fi thriller that is easy to read and enjoy but doesn’t quite provide a deeply satisfying read.