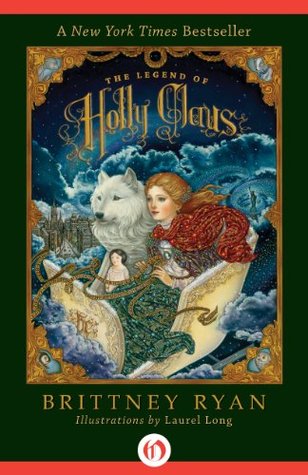 If you see or hear about this book, don’t be like me … don’t wait seven years before you read it!

If you’ve picked up this book, you’re already pretty familiar with Santa Claus.  He’s the King of Forever in the Land of Immortals.  You knew that, right?

The story here begins when a little boy writes to Santa Claus and asks a question that no one has ever asked of the jolly old elf, which brings about a miracle – a daughter, Holly, is born to Santa and Mrs. Claus. But there’s a curse that comes with Holly’s birth: Holly’s heart has been replaced with one made of ice (she has to stay in the cold all the time or her heart will literally break) and the gates to the Land of Immortals are locked, keeping the immortals captive in their land with only one night a year when Santa can deliver his toys. This curse comes from an evil individual named Herrikhan.

Holly grows up to be a beautiful young woman, selfless and giving, and wants to free her people from their captivity. With the help of some animal friends, Holly manages to escape the Land of Immortals and finds herself in Victorian New York – about as far south as she dares go. This world is new and unusual to her, but it doesn’t change her.  She is still the selfless, giving young woman, and she works her way into the hearts of some of the tough, cold Victorian’s.

Not surprisingly, there are young man who would like to catch Holly’s attention, but she’s got her eyes on the goal of freeing her people – though there is one young man ….

This is a beautiful story. Author Brittney Ryan captures the sense of the Victorian era while telling a modern fantasy. Holly is a perfect princess and she’s got an appropriate challenge ahead of her, with a nasty villain as her foil.

I did find the book to be just a little bit too long. It gets caught up with delivering the luscious language in the middle portion of the book.  But ther beginning and ending are strong enough to overcome the slow middle.

I can see where this book might become a seasonal favorite for some, and it’s got all the makings of a holiday movie as well.

The book is lightly illustrated with some very nice drawings by Laurel Long which also evokes the Victorian era.

Looking for a good book? The Legend of Holly Claus by Brittney Ryan is a YA romantic fantasy that gets a little slow at times, but might become a regular holiday read for some.

The Legend of Holly Claus