UNDER THE CAPE – anthology 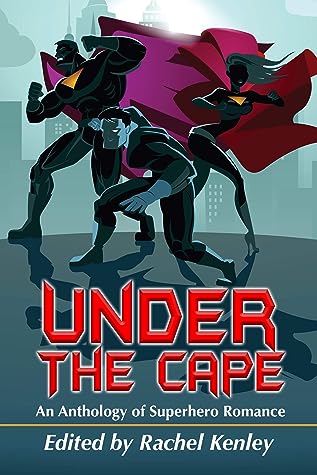 Superheroes and sex – two big topics in today’s market.  I’ve read a number of superhero-related books in the past couple of years, but never one specifically one looking at erotic/sometimes-graphic sexual scenarios, but, why not?  I would think this is the perfect time for a book like this. This particular book is a collection of short fiction and like nearly every anthology I’ve ever read, there are some stories here that i liked, some I didn’t, and some that were fairly average.

The first of three that stood out in a positive light was “Time for No Mercy” by Elizabeth Schechter. I liked the look at politics and political correctness, but I also liked the science and the idea of developing a widespread morning-after type spray that would allow women to not get pregnant any time they didn’t want to, and here the hero was trying to stop it.  This was well written and thoughtful and it really had me thinking afterward.

Next was “No Words Needed” by David T. Valentin in which a young man can’t decide what’s caught his attention the most – that he has superpowers he’s only just discovered, or that the guy he likes happens to like him back. This was well-written and tasteful.

And finally, by the editor of the anthology, Rachel Kenley, we have “Just Be Yourself.”  This was probably the best written story here. The ‘romance’ is dialed up a notch – in fact gets pretty graphic.  But unlike a lot of erotica, where the sex drives a meager plot, this is definitely plot-driven with some steamy sex.  And I chuckled at the sentence: “She had a moment to wish her underwear was sexier, then decided it didn’t matter because she wouldn’t be wearing it much longer.”

On the negative end I’d start with “Swiftly in Love” by Stella B. James. I don’t even want to go into it.  This was just a big ‘no’ for me.

“The Little Push” by Christopher Peruzzi was also at the bottom.  the story, the writing, the characters … nothing clicked.

The rest were quite average.  Nothing was interesting enough that I wanted to read more by any particular author (other than Rachel Kenley).  For an anthology, especially one with only a dozen or so stories, average is about what I would expect.

Introduction by Rachel Kenley
“Flying Fast, Falling Hard” by Kim Strattford
“Where There’s Smoke” by E.D. Gonzalez
“Trust Paradox” by Naomi Hinchen
“Time for No Mercy” by Elizabeth Schechter
“No Words Needed” by David T. Valentin
“Swiftly in Love” by Stella B. James
“Supergay” by Julie Behrens
“The Little Push” by Christopher Peruzzi
“Foolproof” by Louisa Bacio
“Just Be Yourself” by Rachel Kenley
“Love, Law, and the Whippoorwill” by Austin Worley
Author Bios

Looking for a good book? The anthology, Under the Cape, edited by Rachel Kenley is a pretty average collection of short fiction featuring superheroes and romance/erotica.

Under The Cape: An Anthology of Superhero Romance