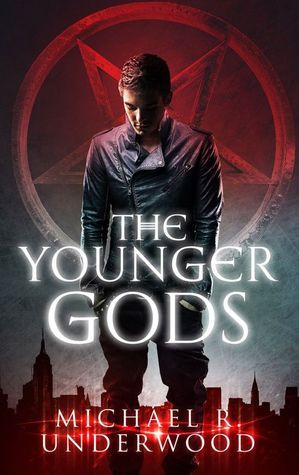 Jacob Greene is a child of cultists – extremists with a deep connection to powerful gods.  To stay in good favor and receive great powers from these gods Jacob’s family (both biological family and cult group family) must occasion a sacrifice now then.

Jacob doesn’t seem to question this (it’s how he’s been raised, after all) until the time he brings his best friend home to be brutally sacrificed. Jacob believes that his friend is a willing participant, honored to be chosen, informed of what was about to take place by Jacob’s father.   Of course nothing could be further from the truth and the friend does NOT go willingly.

This shatters Jacob’s belief and has him question his faith and he leaves his family and cult in order to think things through. But it’s not easy to escape powerful gods, and despite being in the city of New York, all signs point to the fact that the gods know where he is and that something big is about to go down.

Although the description of the book was not necessarily appealing to me, I really enjoyed author Michael R. Underwood’s modern urban fantasy Ree Reyes series, so I was interested in giving this a read as well.  Unfortunately it really does not fare too well.

The fact that this is all pretty dark is fine, and there’s no reason to think it would be anything other than a dark fantasy series, with blood, death, and some bad intentions. But usually there is something in a story like this that will hold a reader’s interest. It should be Jacob Greene in this book, but there’s nothing at all interesting about him. He seems pretty clueless and while we want to root for him, we’re mostly left thinking, “Maybe he will, maybe he won’t.  Oh well.”

This is one of those unusual books where it has fewer than 300 pages, it reads like a 500 page book.  It was a bit of a slog.

Looking for a good book? Michael R. Underwood has a great fantasy series that I would recommend to anyone, but this book, The Younger Gods, is one to avoid.