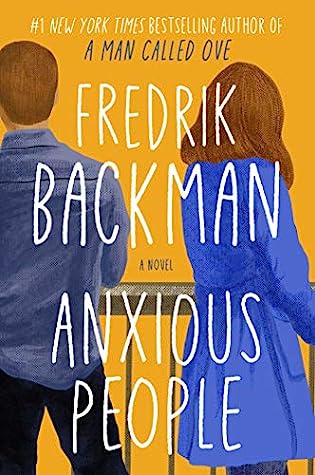 A small town is rocked by a bank robbery when the robber runs to a nearby apartment viewing and holds the group of people gathered hostage and then disappears in thin air even as the police and media vans surround the apartment. The local police department brings all those who had been in the apartment at the time in for questioning to try and understand how the bank robber escaped.
But as the leading police investigators meet with the former hostages they run into a little problem – the witnesses are no help. Some seem to have a grudge with the police. Some are more concerned with appearances. And some border on being absolute idiots.

Slowly, these people come to realize that their lives have intersected in an unusual way and they begin to open up to one another. And the police leading the investigation, who happen to be father and son, come to realize a few things – not just about the bank robber or the lives of these anxious, ordinary people, but about one another as well.

Like many, I am a Fredrik Backman fan, so I was very eager to read this.

One of the first things that strikes me is that this seems much different from most of the books I’ve read by Backman before. The humor, almost slapstick at times, with our two policemen like Keystone Cops, is almost over the top. We run in to idiot after idiot in the police interview room, and I must say that there were times I thought Backman went too far. The lunacy had gone a little bit beyond what I was willing to accept as standard behavior.

But Backman is a master storyteller and I should know enough to trust that he’s setting us up. There is a purpose for all of this, and he will get to it.

It’s ridiculous, and touching, and there are more than a few surprises in store for the reader.

One of the things I find most interesting is that there’s almost no central character here. It could be the bank robber, but we don’t really know much about this person until much later in the book. It could be the father police officer who does play an important role in the story but it’s not really his story being told. Maybe it’s the police officer son? Or the real estate agent who led the apartment viewing? Or maybe … No. It’s everybody’s story, merged at the intersection of a bank robbery gone wrong.

Let me diverge for just a moment … for a little over a decade I worked for a Shakespeare Festival and one of the things the directors would talk about was the reason Shakespeare remained so popular was because he wrote so well about what it was to be human. From his histories, to his comedies, to his dark tragedies, Shakespeare relayed what it meant to be human better than anyone else.

I bring this up, because I think Backman is our present-day Shakespeare. He’s now shown a variety of styles – humor to tragedy – and I can’t think of any living writer who does a better job relaying the complex human experience to readers. Even our hostages – who we think are nothing but a group of idiots – come to show us a tremendous giving spirit, as do our Keystone Cops.

The book is fun, funny, and quite moving. I did think that the process of the interviews with our goofball hostages went on a little too long without much variety and there were moments that I grew bored with the book while reading it. Though upon reflection, I’ve come to understand it better.

This, like all of Backman’s books, is highly recommended.

Looking for a good book? Read Anxious People by Fredrik Backman – you won’t be disappointed.