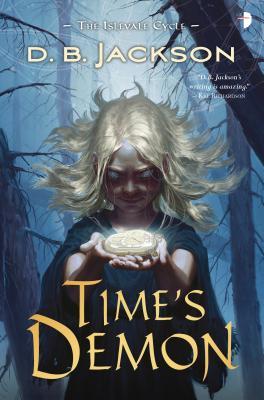 Tobias Doljan is only fifteen, but he’s already lived multiple lives.  Tobias is a ‘Walker’ – he can move backward or forward through time. The only catch is that his body ages with however much time he ‘walks.’  Recently (in the previous book), Mearlan IV, the ruler of a territory, hired Tobias and asked him to Walk fourteen years in the past to convince himself (Mearlan) to not start a war with a neighboring territory.

Now Tobias, only 15 but looking 30, finds himself the target of assassination attempts. Mearlan himself has been killed and his entire family has been wiped out, except for the infant daughter, Sofya.  Tobias is now on the run with Sofya and another Walker (and Spanner [those who can move great distances in a single moment]), Mara, trying to find a way to right the future that he comes from.

Their current flight has them on an ocean journey where they hope to ultimately get to a land where it is rumored that a chronofor (the device a Walker needs to travel through time) might be purchased.

This journey will not only have the assassins after them, but a number of different demons as well … including Droë, who is fascinated with humans in general and Tobias in particular.  Will Tobias and Mara be able to call on Droë for help when they need it most, knowing that she sees Mara as competition for Tobias’ affections?

I really enjoyed the first book in this series and I thought that this volume was actually tighter with the story. However, this book is also a classic ‘middle’ book.  We’ve lost sight of the initial cause of Tobias’ being stranded in time, and unless you’ve read the first book, you don’t realize that the Tobias had a bit of a crush on Sofya, now the infant in tow.

Author D.B. Jackson does provide a “What Has Come Before: A Summary of TIME’S CHILDREN” prologue, which is great (more books that are part of a series should do this).

I definitely enjoyed this portion of the journey, but with all that happens to them, more than once I wondered if this was still part of the story that was begin in Time’s Children, or where we now on some completely different journey?  It is a bit of both, of course.

This was a lot of fun, even if I didn’t feel it was the same journey I started back with the first book.

Looking for a good book? Time’s Demon by D. B. Jackson is a strong fantasy with tremendous characters, which appears to be far from the story it started out to be.