THE KINGDOM OF THE GODS – graphic novel 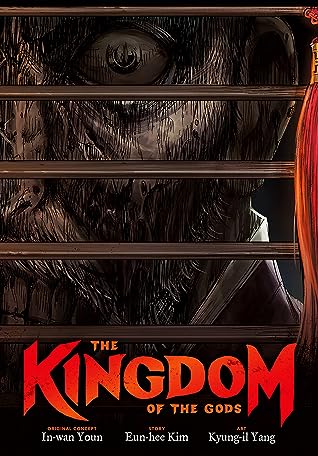 I requested this book because it looked interesting. I do occasionally enjoy a graphic novel, and lately I’ve wanted graphic novels that are not the ‘norm.’  I had no idea that this was a Netflix series.

This book is two stories.  They don’t don’t really seem to be related – not the same characters, not the same setting.  It’s really confused me.

In the first story, a country’s prince turns to a common thug (who used to be much more than that) for help in getting back to his castle.  All of his bodyguards have been killed. The prince really wants to be a good ruler.  They come across a town where all the dead citizens are coming back to life. A local doctor (an attractive woman) is trying to understand what is happening to them.  It’s a classic zombie story that doesn’t really go anywhere.

This is a Netflix show?

In the second story, a mass murderer/cannibal is exiled to an island between Japan and Korea. He doesn’t seem too torn up about it, instead reveling in his being able to rule over the deserted land.

Then a doctor from another country is also exiled to the island. He because of the killing and dissecting of his patients (all in the name of science, of course).  He also doesn’t seem too upset with his banishment.

The two men discover each other (it’s not a very big island) and while neither understands the other’s language, they do both see each other as a threat … as well as an opportunity to cut, dissect, and feed.  They fight.  And fight. And fight. Both masters with a blade and evenly matched.

Another ships’ crew happens on the island, and the two men agree to take a break from trying to kill each other in order to attack the newcomers.

Yeah … that’s pretty much it.

Neither story is particularly well developed and the art is fair at best.  In fact, for most of the second story, I really believed that one of the characters (the doctor) was a woman. This made it somewhat interesting (a female murdering doctor who can fight intensely well).  When she was finally addressed as ‘he’ I realized my error.  Not that it made any difference (other than to be less interesting).

This book did nothing for me, and I definitely have no interest in seeing a television program based on what I read here.

Looking for a good book? The Kingdom of the Gods is a graphic novel that is quite unremarkable.

The Kingdom of the Gods