TUNE IT OUT – Jamie Sumner 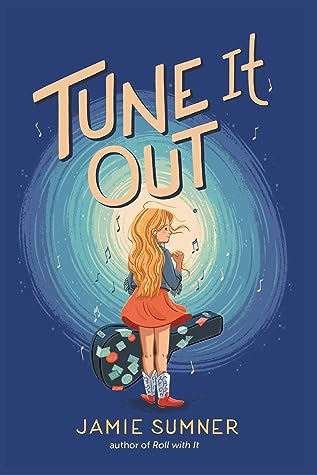 Louise “Lou” Montgomery lives with her mom – a struggling, single parent with nothing but praise and encouragement for her daughter.  Maybe a little too much so.

Lou doesn’t like sudden or loud noises.  She doesn’t like to be touched (or any sort of contact). But Lou’s mom won’t listen to anyone who might suggest that Lou is ‘on the spectrum’ and she pushes her daughter, who has a great singing voice, to perform in public at local establishments.

Lou’s mom is convinced that the two of them should leave their Lake Tahoe ‘home’ and move to Los Angeles where Lou can really be discovered. But before they can head out, Lou (who is only 12) is driving the car to pick up her mother and has an accident.  Having an accident gets the police involved, and being only 12 and driving gets child protective services involved.

It seems that Lou hasn’t been to school in some time, and home life sometimes means sleeping in the car.  Lou is going to be sent away, separated from her mother, and she will be staying (at her mother’s request) with her Aunt Ginger and Uncle Dan in Nashville, until her mom can get settled and prove that she can care for her daughter.

Lou misses her mother fiercely, but makes some pretty good friends at her new school – friends who really understand her (they wave signs that read “Applause” instead of actually clapping just so that they don’t upset Lou). She gets involved in the school play (as assistant director) and meets with a counselor who listens and is patient.

When Lou does finally get to see her mother (in a public, supervised location) she sees that her mother really isn’t ready for her.  She doesn’t listen to Lou, instead making plans as if nothing had changed.  Lou sets her straight, letting her know that she’s never liked preforming in public, and she’ll stay with Ginger and Dan and her friends.

This is an easy to read, quick book, with lots of heart, plenty of feel-good moments, and a central character that readers will rally around.

I don’t know much about autism or ‘the spectrum’ but clearly Lou shows signs of having some issues.  Whether or not these specific issues will resonate with readers – I don’t know.  But most of us have felt ‘different’ or separate from the crowd during school, and there are aspect here that we can relate to.

I have a few issues with the mother, presented in such a positive light – even when Lou finally realizes that her mother hasn’t been understanding her. Everything here is Hallmark Channel squeaky clean and we don’t get a lot of time to settle in to all of Lou’s new routines, but instead Lou makes big adjustments that seem slightly out of character in order to keep the story moving swiftly.

Still, it tugs at your heart and Lou is a strong character and it’s easy to want to see her succeed.  This will definitely hit home with a certain school-aged audience.

Looking for a good book? Tune it Out by Jamie Sumner is a very positive look at a young girl with some social issues showing strength of character as she starts a new life (at age 12) with distant relatives and new friends.