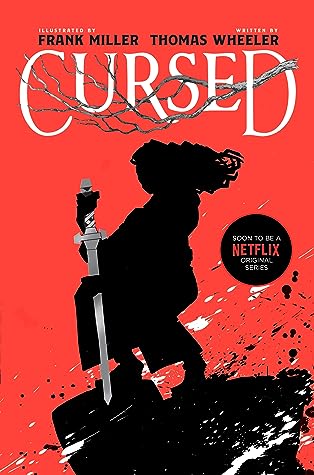 I’ve had an interest in the Arthurian legends for a very, very long time and it’s been interesting to see the cyclical nature of new Arthur-era stories.  We can go years without seeing new Arthur stories being told and then suddenly we get a slough of them.  I was interested in this because of the multi-media aspect – illustrations by noted comic book artist Frank Miller, and that this was (when I started reading this) about to be aired on Netflix as a series (the series was released the day after I finished reading this).

We’ve got all the familiar characters (including the sword Excalibur), but the twist with this take on the legend is that the sword has chosen a young woman (Nimue) as the worthy bearer.

Nimue grew up in a village of druids, but she was feared even by the village elders, for her formidable control of dark magic. Her mother has been Excalibur’s keeper and, just before she dies, instructs Nimue to bring the sword to a certain wizard who will know what to do with it.  But once she’s got it in her hands, Nimue doesn’t want to part with it, and she’s pretty certain it doesn’t want her to let it go.

I found this book … boring.  Magic, wizards, witches, druids, Excalibur, knights.  This should be anything BUT boring, and yet it really was kind of dreadfully dull.

None of the characters are particularly heroic.  If you’re going to retell the Arthurian legend in a new and interesting way, wouldn’t you want to keep the heroic nature of some of the characters?  I know this is trying to be different, but if we’re changing things up so drastically that we don’t keep any of the elements other than a sword, why not make this a unique world, instead of treading on Arthurian ground?

I feel like there’s been a fair amount of hype over the inclusion of art by Frank Miller.  Personally, I don’t feel one way or the other about Miller’s art … but I didn’t really understand what he was going for here.  This art reminded me more of a stylized Ralph Bakshi interpretation than new works by the famous Daredevil and Batman artist.  There’s also not a lot of artwork here (more than most books, significantly less than a graphic novel).  Anyone buying it for the art work will likely be disappointed. Anyone buying it for the story will be even more disappointed.

Looking for a good book? Cursed, by Thomas Wheeler, looks like it should be a winner, given the well-known characters and legend that it plays with, and the artist of a strong reputation who contributes drawings to the project, proving that looks can be deceiving.