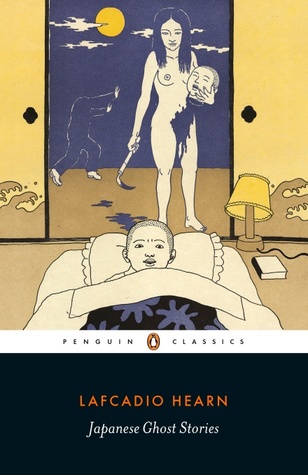 Certain things are universal, such as a person’s sense of dread and fear, and perhaps, even, the belief in an existence after death. Readers of my book review blog will note a moderate number of horror or dark fantasy books that I have read and reviewed.  I do enjoy the genre, which is a little bit surprising, because I don’t enjoy these sorts of movies.  Maybe it’s the ability to control it that I like in literature?  But I also have a long-standing appreciation for Japanese arts and culture and so a combination of the two ghost stories and Japanese culture, proves highly interesting to me.

The first thing people may notice is that these ghost stories have a very different tone to them.  These aren’t horror stories – there are a few that are kind of terrifying – but in some ways these are more mythology.  Author/editor Lafcadio Hearn gives us a good cross section of stories and does a really fine job of retelling these stories for an English reading audience.  We do get a sense that these were written at very different times by Hearn as they don’t really have a consistent sound to them.  It does make it seem as though these are told by different people, which is good.

All of these stories were good, in different ways and for different reasons.  There were a few that stood out as exceptional to me.

“The Corpse-Rider” has one of the best opening paragraphs of a short story I’ve ever read.  It’s a story of a woman scorned and right from the start we know this is going to be a dark and bitter story.  It’s fantastic!

“The Story of Kwashin Koji” was a fun tale (not so much a ghost story) in which an artist shows what he can do.

I enjoyed “Rokuro-Kubi” quite a bit.  It is the story of a great samurai who becomes a wandering priest when the house he served as samurai falls into ruin. He comes across five bodies without heads and knows them to be Rokuro-Kubi and that he must move the bodies to a new location so that the heads can never be rejoined.  This has such a great sense of being Japenese.  This is not the sort of tale or myth that could easily come from another culture.

Perhaps my favorite story in the collection was “Yuki-Onna”.  This was very much a ghost story, and very much a theme I feel I’ve read before in other myths from other cultures in which a spirit makes a man promise he will do certain things or never do certain things and in exchange the spirit will be an ever-faithful wife.  You can probably guess what ultimately happens.

Overall, this is a wonderful collection.  The book contains the following:

Looking for a good book? Japanese Ghost Stories, by Lafcadio Hearn, is an excellent collection of Japanese tales, myths, and ghost stories. Don’t look for an assortment of horror and terror, though there are some, but rather multiple types of stories.