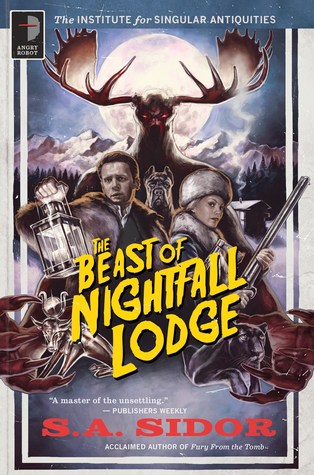 Rom Hardy is an explorer. An Egyptologist by profession, he is nearly always willing to investigate something unusual. When he is contacted by an old friend, a bounty-hunter by the name of Rex McTroy, Rom and his associates soon find themselves in the mountains of New Mexico tracking a savage beast that has been killing with reckless abandon.  Tracking shouldn’t be too hard since there are bodies everywhere, a sign that the beast is quite active.

A big game hunter has offered up a prize for the capture of the beast and Rom’s wealthy patron signs him up. Soon there isn’t just the beast to worry about, but a bunch of crazed, prize-hungry hunters with guns to be concerned about as well.

Just as with the previous book in The Institute for Singular Antiquities series, this has the sense of intentionally being the literary equivalent to a “B” movie.  High on adventure and action with a stock set of characters and where we probably know what the outcome will be but the journey is half the fun and seeing who, in addition to the main character, will survive to tell the tale.  Publisher Angry Robot apparently has the same thought as the book cover artwork also has that B-movie poster look to it (and I can’t help but wonder how much that has influenced my reading of the book).

This book moves from that Indiana Jones-style adventure of the first book, into more of the Roger Corman horror flick-style. Still it works, and for those who want something quick and dark (but not too scary) then this is probably what you are looking for.

I miss the more obvious threat of Egyptian mummies (just writing “Egyptian mummies” brings to mind an immediate image of terror).  Moving to a ‘beast’ of unknown likeness means that author S.A. Sidor has to work harder to bring the terror to mind, and in that, he maybe isn’t quite as successful.  But the action surrounding the hunt and the ending somewhat make up for this.

Looking for a good book? For a quick action/horror read, like watching a 1960’s B-movie, check out S.A. Sidor’s The Beast of Nightfall Lodge, the second book in The Institute for Singular Antiquities series.

The Beast of Nightfall Lodge

series: The Institute for Singular Antiquities #2