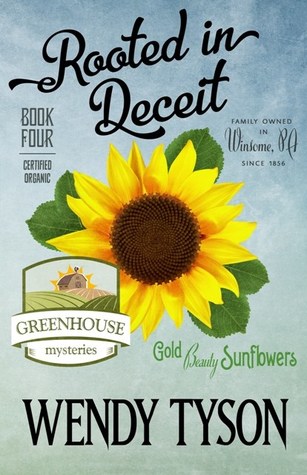 Megan Sawyer is working at the idyllic Washington Acres in Winsome, Pennsylvania. But her perfect summer, which includes some quality time with the handsome Dr. Finn, is about to go downhill rapidly when Megan learns that her father (who’s never been too reliable) and his new wife, Sylvia, plan to stay at a retreat center the next town over.

Sylvia has plans to open up a specialty boutique and is trying to secure the artwork of an artist whose work is showing at the retreat center. The meeting between Sylvia and the artist doesn’t go well and shortly after their volatile encounter the artist, Thana Moore is found murdered.  Sylvia is the prime suspect. Megan will investigate, but she also has ties to Thana … at one time, Thana and Megan were best of friends. Now as Megan dives into solving this case, she learns a lot about her friend since their friendship waned, but more importantly, that no one in the region is safe until something (or someone) sinister is taken down.

For the most part, I’ve really liked the different mystery series’ that I’ve read from publisher Henery Press.  However, I have selected the series’ I’ve wanted to read. Wanting to branch out a bit, I thought I’d give this title a try.

Mostly likely it was the fact that I was coming blind into the 4th book in a series, but there was very little here that held any appeal for me. The characters never stood out as sharp and unique individuals. Instead, I felt that these were just characters created to move a story forward.

It could also be that this book was a little more ‘cozy’ than many of the mysteries that I’ve enjoyed. I’m typically not a fan of the cozy mystery genre, but there are some that I enjoy a lot. This one just never caught my attention and I struggled to read it.

Looking for a good book? Rooted in Deceit by Wendy Tyson is a cozy mystery that never takes off. It’s possible that you really need to read the entire series to care about the characters.