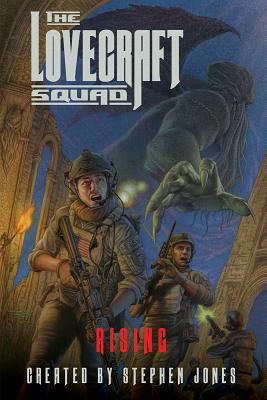 There are people (and creatures) in the known universe who are bent on bringing about chaos. The most dangerous of these are cultists known as The Olde Fellowes and The Esoteric Order of Dagon who, with supernatural help, will do whatever they can to disrupt order.  To combat this, a covert group of professionals known as the Human Protection League (HPL) – affectionately dubbed “The Lovecraft Squad” – was created.  Think of them as sort of an ‘X-Files” team, but with more subtlety and power.

The battle has not been going well and the HPL team have collected at a new headquarters to regroup. The cultists are preparing the way for ancient, powerful gods to be resurrected and freed from imprisonment and restore their power. An Eldritch War is brewing and the best hope that the HPL have just might be a man out of his own time.

The book is a collection of short stories but it is put together as if it were a larger, cohesive novel with a lot of sub-plots. It’s kind of a strange arrangement. If you don’t know that these are short stories – there is no table of contents and while each chapter has a title, there is no author associated with it – then you might get really confused (as I was when I first read the previous book in the series).

The authors behind these stories are all talented.  There weren’t any stories/chapters that I did not enjoy. One story definitely stood out as being exceptionally powerful – ‘The Haunters of the Dark Affair” by Steve Rasnic Tem. This story felt very current and I definitely felt as though I were invested in what was happening.  It was quite moving.

The darkness of the impending Eldritch War and the supernatural aspects of the ancient, dark gods certainly suggests that this is not a book for everyone, but if you pause to look at this book because the word ‘Lovecraft’ caught your eye, then I highly recommend it. “The Story So Far…” at the start will get you caught up with all you need to know to start reading immediately.

This book contains the following (authors listed are those credited with being the copyright holders at the back of the book):

I mentioned it in my review of the previous Lovecraft Squad book, but I’ll say it again … the cover by Douglas Klauba really captures the old pulp adventure feel.