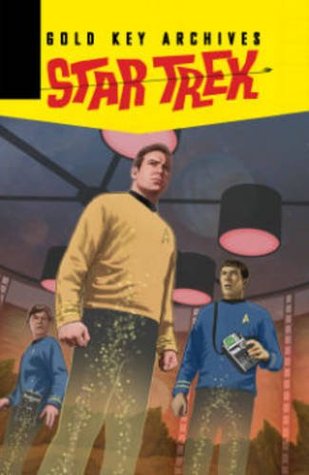 Featuring issue numbers 19-24 we continue to look at the Gold Key Star Trek comics collection. The stories have gotten better – to the point where some of these stories could have been filmed episodes (and some of them feel like rip-offs of episodes). The art is still stunning, but often very clearly ‘wrong’ (look at Spock’s bright red uniform tunic on the cover of the first issue featured here!).

Our first story is “The Haunted Asteroid” – magic, mysticism, and robots seem to be  running theme through these later stories. We also see more female guest star of the week … er, issue … in these books. The authors apparently are catching on to what’s happening in the television series.

“A World Gone Mad” has Kirk and crew playing nursemaid to a bratty youngster – complete with Napoleon-style uniform – who is about to be the leader of a planet.  He’s unaware that anyone could possibly not love him, much less want him dead. But perhaps they’re not really acting of their own accord.

“The Mummies of Heitius VII” – Take mummies and curses from ancient Egypt and place them on the Enterprise. How can you go wrong?

“Siege in Superspace” – One of my favorites because of the confidence one must have in a starship captain who doesn’t know what a black hole is!

The pink-skinned Uhura is rather insulting, but the story is one of the stronger ones even if it is a bit easily resolved.

“Child’s Play” follows some storylines that we’ve seen before. We have serious need for a medicine that can only be made with the herb found on this planet.  The planet is run by children. To complicate matters, an asteroid in on a collision course and only the Enterprise stands in its way.

“The Trial of Captain Kirk” – even the title is reflective of a Star Trek episode (“Court Martial”). Kirk is accused of accepting bribes to protect pirates. In order to fight these charges, Kirk undergoes cosmetic surgery so that he can escape the watchful eye of the Federation.  The surgery … gives him an afro. (I kid you not!)

Spock and McCoy leave their bodies on the Enterprise but put their consciousness’s into robots so that they can head down to a planet with an atmosphere so dangerous it would destroy their bodies in seconds.

There is a mini feature of artist George Wilson who painted many of the covers for the Gold Key Star Trek comics.

It’s still a bit fun to reread these comics and to relive some of the exciting, geeky days as a young Trekkie. Nostalgia is mostly all this is good for, but unless you scour ebay and buy up all the old comics at many times the cover price now, this is the only – and probably the best – way to read these classic comics.