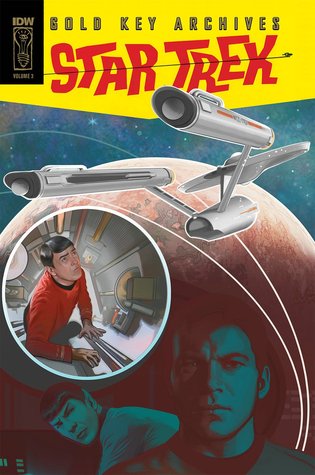 Gold Key Comics made the early gamble and purchased the rights to publish a comic book series based on the then new television program, Star Trek. The artists and writers during the first year of publication had actually never seen an episode of the program.  And it shows.  The work was based on a few publicity photos given to them, and a synopsis of the show and main characters.

But comic writer Len Wein joined the team and he was actually familiar with the show and brought a little more familiarity to the books, even getting artist Alberto Giolitti to include things such as the arrow insignia on the chest of the uniforms (not all the time, which gets a little frustrating).

The stories start getting a little bit better.  A little bit.  They still seem very much geared to children comic book readers and not the adults who were watching the show.

“Dark Traveler” has an intruder come to get the Enterprise‘s help on a Utopian world where a bad man is operating robots to take control.

“Museum At the End of Time” – the Enterprise is caught in a space storm and taken through a hole in space and comes to a strange world where a collector has specimens from all over the galaxy.  The Klingons are also caught in the storm and Kirk and crew must convince the Klingons to work together in order to escape the strange world.

“The Cosmic Cavemen” – finally we have gold uniforms on the crew! On a prehistoric world, where cavemen ride pterodactyls, Spock is recognized as a god because his likeness (including his uniform tunic) are carved in stone in their worship area.

“The Hijacked Planet” –  there’s love in the air, and a dog saves the day.

This is the first volume where we actually feel like we’re seeing characters from the television series, and that makes this collection just a bit more fun.

Looking for a good book? Star Trek: Gold Key Archives: Volume 3 starts to become recognizable Star Trek and Trekkies will want to add this to their collection.