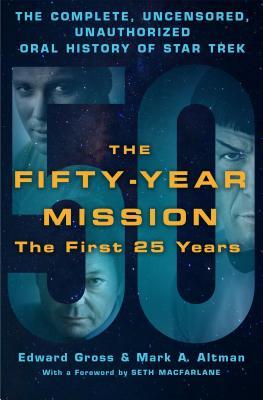 Edward Gross and Mark Altman’s The Fifty-Year Mission is a really great look at the history of Star Trek, but not just as one person’s research or recollection, but from the memories and thoughts of hundreds of people who had a part in Star Trek (or were heavily influenced by Star Trek).

The book is laid out in such a way that we get short snippets of memories/conversations/interviews.  Most of these memories are about a paragraph in length. In some rare instances we might get an entire page of just one person’s recollection. But all the short recollections are grouped together in chapters to build on one aspect of Star Trek‘s history.

On the surface, this seems rather ‘simple,’ but Gross and Altman generally piece these paragraphs together in such a way that it almost feels as though the different voices are speaking to one another or referencing one another. It’s quite clever and clearly took a good amount of work to select the right pieces. It’s especially fun when comments either contradict someone else, or don’t look fondly on someone else, who also is then quoted.

Certainly there were topics that have been talked about and discussed ad nauseum in fandom circles, but I felt that I really learned a few new things about Star Trek‘s history as well.  I was particularly interested in the early, pre-planning days of Star Trek. While I knew some of the general talking points about Gene Roddenberry’s development of the concept and Lucille Ball/Desi Arnez’s gamble on taking on the show, we get some more of the fine details from people who were there at the time.

I also enjoyed reading some of the comments from the show’s regulars and guest stars.  It was definitely interesting to hear the reaction from one of the female guests on her interactions with William Shatner.

Reading the loads of disparaging comments about Roddenberry and his behavior, constantly sticking his finger in the process, even when he was officially out of the picture, was enlightening.  He is always acknowledged for what he created, and even lauded for the best of Trek, but it was also his cash cow and he held onto it as tightly as he could.

I expected this to take me a long time to read. It’s packed full of information and remembrances, yet I read this in a surprisingly short amount of time.  The short paragraph structure of the book made it easy for me to want to read ‘just one more’ comment or reflection.

The book covers the earliest days of Star Trek through the original cast movies, and just touches on The Next Generation and beyond.

Looking for a good book?  The Fifty-Year Mission by Edward Gross and Mark A. Altman is a really great look behind the scenes of one of pop culture’s most enduring television programs. Fans of Star Trek really should read it.