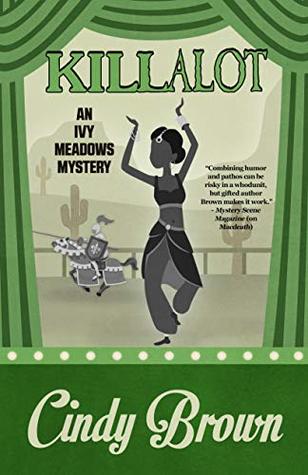 Ivy Meadows (the stage name for Olive Ziegwart) is an actress and part-time private investigator working for her uncle Bob Duda of Duda Detectives. Things are looking up for Ivy … a famous playwright is in Arizona and he’s planning something that could be even bigger than his hit musical, Hello Dolly Madison – a musical version of Camelot with the Kennedy’s and Marilyn Monroe as the leading characters. And Ivy manages to snag the coveted role of Marilyn Monroe. This could easily be the job that gets her to Hollywood!

But first Ivy needs to help her uncle with a new assignment. At a Renaissance Faire! A jouster was killed in front of a large crowd, but the murderer, wearing a full suit of armor, couldn’t be identified, and escape on horseback.  Ivy must go undercover at the faire, as a British/Cockney belly dancer to see if she can learn who might have had it in for dead jouster.  Unfortunately, her top suspects are her best friend Riley, and the man who could propel her career in Hollywood, the playwright behind the Kennedy Camelot.

I really do enjoy the Ivy Meadows Mystery series. The theatre mash-ups are ridiculously fun and Ivy/Olive comes across as tremendously ‘real.’  Her sense of eagerness, both for her acting career and for her detective work, strike me as appropriate for a young woman finding her own way and striking out on her own.

This particular volume in the series was not quite as endearing to me, but mostly because of the location.  This takes place mostly on site at a Renaissance Faire. Despite my own interest in theatre, fencing, and a one-time member of the Society for Creative Anachronism, I don’t enjoy Renaissance Faires! I have some specific reasons for this, which I won’t go into, but my non-enjoyment of RenFaires definitely killed my interest in this story.  And while I chuckled periodically over the Kennedy-themed Camelot and Ivy’s portrayal of Marilyn Monroe (which didn’t strike me as believable as her roles in previous books), this was really quite secondary to the plot and not really a mash-up as we’ve had before.  In fact this idea was quite on-track – the theme wasn’t as outrageous as the implementation of the project.

I recommend this series, but for new readers to the Ivy Meadows Mysteries, I wouldn’t recommend starting with this book.

Looking for a good book? Killalot is the 6th book in the Ivy Meadows Mystery Series by Cindy Brown and budding actress/part-time detective Ivy Meadows steps out of the theatre and into the sun to go undercover at a Renaissance Faire.