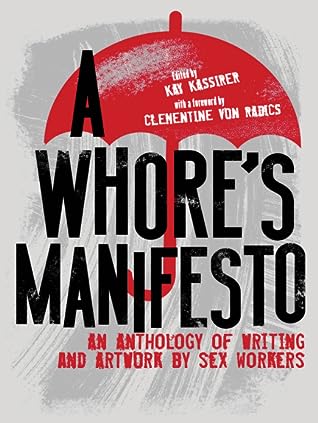 When I saw this book offered up to reviewers I was really interested in getting a copy.  I felt that a book like this would contain works that really come from the gut.  Visceral emotions.  And I wasn’t disappointed.

The subtitle of the book is “An Anthology of Writing and Artwork by Sex Workers” and one of the first things I learned in this book is what constitutes a ‘sex worker.’  It seems pretty obvious, right?  But I’ll admit that I hadn’t thought much about this and I hadn’t pictured phone sex workers, internet camming, and ‘sugar babies’ (I had to think for a bit about what that meant – and then it never occurred to me that some thought of this as a job) as sex workers. I had definitely thought more along the lines of physical touch.

The book is primarily poetry, which I guess isn’t a surprise, but I was definitely wishing that there was more artwork/photography included – there was one drawing and one photo. The drawing was a little too obvious for me (an idea I’ve seen many times [given its nature, I won’t say too much about it, other than it is genitalia]) though the photo was interesting and artistic.

I am not typically a fan of poetry – it’s just a literary form I’ve never been real fond of – but there were some poems here that I thought were really well done and powerful. Starting with the first piece, “naked on the internet” by Vivienne L’Crave, which was really raw and powerful and definitely set a tone for the rest of the book.  Though I’m happy to say that not all the works here were as gritty or dark as this.

Gigi Genet’s “AFTER ANIMORPHS” is shorter, but no less dark and powerful.

I also really liked Lux Aeterna’s “Gods & Monsters” and all the pieces by someone referred to as ‘Strawberry’ and the two poems by the editor, Kay Kassirer.  Kassirer’s “Work Follows Me Home” is probably my favorite poem in the book.  It might be the shortest work in the book, but it packs a lot into it.

In short fiction, “The Retiree” by Kristy Lin Billuni stuck out for me as one of the few works here with a bit more upbeat tone and deals with a subject that I quite expected to read more of – women looking for work after leaving the sex industry.

“Reluctance” by June Sayers was a little strange to me, but I liked seeing the intelligence of the sex worker. Still, she’s a ‘for hire’ worker and despite very likely being the smarter, wiser of the pair, she’s the one trying to do the impressing.

While not everything impressed, that’s not unusual with an anthology.  Fortunately there weren’t any real written works that were duds.  Kassirer has done a really fine job of putting this collection together.

Looking for a good book? The Whore’s Manifesto is a collection of poems and stories written by sex workers and is a powerful assortment that makes it pretty clear that this is a line of work that doesn’t offer up very many positives.

I received a copy of this book from the publisher, through Edelweiss, in exchange for an honest review.

A Whore’s Manifesto: An Anthology of Writing and Artwork by Sex Workers