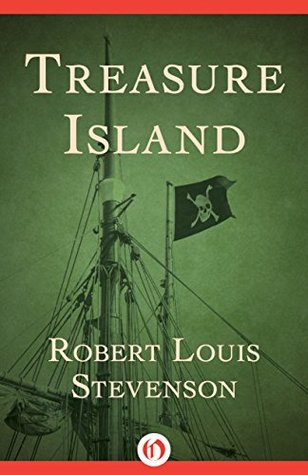 Although I’m not lacking for reading material I decided that it’s important to read some of the ‘classics’ of literature to see how they stack up for the modern reader. Much of Robert Louis Stevenson’s Treasure Island has become standard pirate lore in modern media.  They way we think of a pirate – how they talk, what they sing (“Yo ho ho and a bottle of rum”), how they behave, maps with treasure marked by an ‘X’ – comes almost exclusively, still, from this book.

Young boy Jim Hawkins encounters a man, old Billy Bones, at the Admiral Benbow Inn in England.  Billy Bones tells young Hawkins to keep an eye out for a one-legged scoundrel (Long John Silver).  With that moment, Hawkins is pulled into a dangerous adventure.

Bones is attacked by former shipmates and dies (of a stroke) a short time later.  The shipmates attack the lodge, but Hawkins and his mother have already taken the pirate’s map from Bones’ belongings and made their escape from the inn.  Jim shares the map with some local respectable men, who decide to seek this treasure and take Jim on as a cabin boy.

On the island where the treasure should be buried, Jim encounters Ben Gunn, a former shipmate of the dreaded pirate who buried the treasure they now seek.  Jim navigates the rough world of the pirate life while trying to remain a good, solid young man despite Silver’s taking him under his wing. And when the treasure chest is found and the chest is empty, Jim, and Silver, face a mutinous crew ready to kill the leader and his protected boy.

So often we find literature from this era to be a bit dry and difficult to read due to our changes in reading habits and styles of writing, but this book holds up incredibly well.  It moves along swiftly and is quite exciting to read.  This can still be considered a page-turner as we can’t wait to find out what happens next to Jim along his journey.

This is definitely highly recommended.

Looking for a good book? If you think you can’t read that ‘old stuff’ because it’s slow reading, then pick up this classic, Treasure Island by Robert Louis Stevenson, and be brought into an exciting adventure story.