GIVE A DAMN JONES – Bill Pronzini 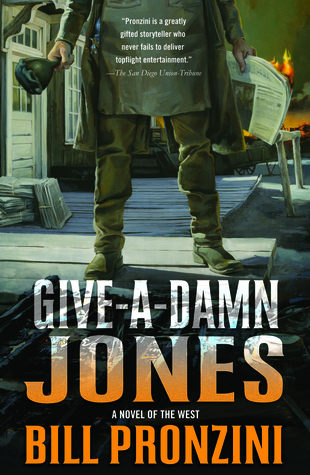 Bill Pronzini is a wonderful workhorse of a writer.  I’ve been reading him since I was in college and that was a few decades ago. I’ve enjoyed many of his Quincannon series books and some of his Nameless Detectives books. I’m always up for reading a Pronzini book because I know I’ll get a first-rate story with solid characters.

Give-A-Damn Jones is about a freelance typesetter who wanders the West lending his typesetting talents to newspapers all over the land. He’s not very fond of his “Give-a-Damn” nickname but the name is appropriate because Artemis Jones isn’t one to back down or walk away just because the going gets tough.  When he walks into Box Elder, Montana he meets up with the local newspaper editor who is passionate about telling it like it is and instigating change.  But the town is full of characters, such as the tough blacksmith with a reputation for cheating his customers; a travelling medicine show/dentist ready to pull teeth for free but recommending his alcohol/medicine to ease the pain; the former convict still trying to clear his name; the rancher who may have lied to convict the man (to protect his daughter); and the local sheriff who knows there needs to be some changes but isn’t quite ready to mix it up. If Artemis Jones knew he was walking into a town so on the verge of exploding from within, he may have ridden past. But he’s there now, and, well, he’ll just give a damn.

It took me some time to get comfortable with this story.  The book is written in first person and as I read, I noted that the first nine chapters were each told from the view point of someone different, and none of them Artemis Jones.  Finally, then, we got some characters to tell their story in recurring chapters, and I began to understand what Pronzini was doing.

Jones doesn’t talk or write about himself.  If you want the story on him, he need to get it from everyone who’s made contact with him, and that’s how Pronzini is telling this story. And because they are first person accounts, we get a few additional details … some sub-plots that don’t necessarily affect Jones directly.

This is an interesting read for it’s format and style.  The characters are solid and real but a bit uninteresting. The town people’s dysfunction is what makes them interesting and a the community gets sorted out we lose interest.

I also found it humorous that the itinerant typesetter lifestyle was known and respected in towns like Box Elder, Montana.  I don’t know my American history well enough to know if this was true or not, but I suspect this was Pronzini having a little fun.

Looking for a good book? Give-A-Damn Jones by Bill Pronzini is a western without the stereotypical gunslinger and it’s the format of the book that is more interesting than the story.