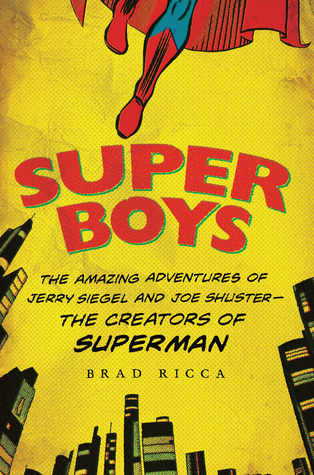 Well this was informative!

It’s pretty hard not to know who the character of Superman is, but naming the creators of Superman might be much more challenging to most people.  Fans of comics and graphic novels likely already know of Jerry Siegel and Joe Shuster and even someone like myself – very much on the outer fringe of comic/graphic novel reading – knew about the long battle Siegel and Shuster had to retain (or regain) the rights to the character.

Biographer Brad Ricca has done some exhaustive research and we get a look at these two young men from their early school days, to the high school days when the early characteristics of Superman could be found.

Starting as a fan and writing letters science fiction magazines, it was clear that Jerry was a go-getter and a planner and he thought he’d get rich writing stories. When he Jerry met Joe, he saw someone who could illustrate his stories and together, like many high school boys who dram of making it big doing something they love, the multiple ways that a dream can crash never occurred to them.

Small successes built up and they were producing stories for comics at a fantastic rate, and making good (for them, at the time) money.  But it was a difficult period in publishing (when isn’t it?) and sometimes they worked on hand-shake agreements or with promises for more later.  And through innocence and bad choices, they gave away their rights to what would become one of the most iconic figures in all of pop culture. And once those rights were gone, Jerry and Joe weren’t essential to be part of the story-telling process, and while their creation would make millions of dollars for a publisher, Joe and Jerry were often challenged just to find work.

Joe and Jerry’s story is quite sad, and not all that unusual for those working in this industry. Much of their later lives are spent challenging the rights to Superman and trying to get their due and even now, at the end of this book, their families are trying to get these rights maintained.

The story of the lawsuits goes on a bit too long for me – though I recognize that this is what consumed Jerry for much of his life.  Still, I found his early years – the environment in which he grew to become a writer – the most fascinating.

This is a really well-written biography. It is thorough and doesn’t really manage to take sides (in the debate about rights ownership), which is nice.  Yes…it’s about Joe and Jerry and there is going to be some bias toward their being allowed to cash in on their character, but Ricca himself doesn’t outright say that.  He lets Jerry say it.

Looking for a good book? Super Boys by Brad Ricca is a solid biography of the creators of Superman, from their early days before Superman, to their decades-long battle for the rights to their greatest creation. It is fascinating and well written.