THROWBACK THURSDAY – REVIEWING A BOOK FROM MY SHELF 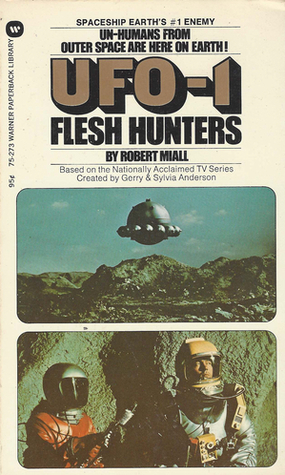 Guilty pleasure time! As a latch-key teen in the 1970’s, I grew up watching a good deal of television. My favorite was Star Trek, but when I got wind of a new sci-fi show coming out of Great Britain and that one of my local stations was going to carry it, I was thrilled, Gerry and Sylvia Anderson’s UFO was exciting, powerful sci-fi drama for this teen boy! I followed everything I could about this show (which was much more difficult in the days before the internet) and when I heard that there were two novels coming out, based on the series, I pre-ordered them from my local bookstore to make sure I would get a copy.

The basic premise of the series: aliens from another world are real, but we don’t know much about who they are or where they come from, but they seem to be harvesting human organs.  A secret task force known as SHADO (Supreme Headquarters Alien Defence Organization) has been established to defend the world from the aliens. To hide the day-to-day operations, the main center for this task force is hidden beneath a film studio in Great Britain.  The film studio (which actively produces movies) is the perfect cover because it explains the often unusual, high-tech-looking equipment that might move in and out.

The task force also has base on the moon that is staffed at all times as this is the first line of defense against the UFOs. Shuttles to and from the moonbase occur somewhat regularly.

There is also no end to the vehicles that pursue UFOs and aliens around the world, from submarines that can launch fighter jets from underwater, to tank-like crawlers.

In this book by Robert Miall we are introduced to Paul Foster (a series regular) as a military pilot who believes he’s sighted (and filmed) a UFO and can’t get anyone to believe him.  He is then introduced to Colonel Ed Straker and Colonel Alec Freeman, the commander and second in command of SHADO, respectively. They carefully vet and recruit Freeman, introducing him to all aspects of the organization, but when highly classified information is leaked to the press, Paul Freeman is the mostly likely source.

For me, this was welcomed nostalgia, a chance to revisit a world that I enjoyed on the screen and characters I felt I knew well back in the 1970’s … and they haven’t changed a bit, which made me feel as though I hadn’t either.

I don’t know that I would recommend this to anyone not already familiar with the television series, and even then, only as nostalgia.

Looking for a good book? UFO-1: Flesh Hunters by Robert Miall is a story based on a short-lived British television show. Fans may want to read it but most readers will likely skip it.