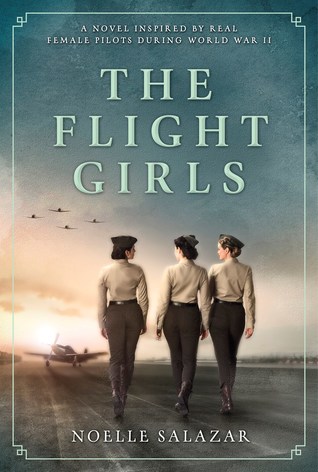 While I did request this book, looking for something more along the lines of historical fiction rather than a romance, but despite the strong romance angle here, I enjoyed this book.

It is because she knows how to fly that she signed up to train military pilots how to fly as the world went to war in the early 1940’s and that she found herself in Hawaii when the Japanese bombed Pearl Harbor and Audrey was witness to horrible deaths and destruction. It was also in Hawaii that Audrey met James Hart, a man she called ‘friend’ but whom she would never stop thinking about.

Audrey joined the WASP (Women Airforce Service Pilots) program, connecting with other patriotic women who would become close friends. Here she would meet the dashing Officer Wilson, a man willing to risk his commission for the opportunity to take Audrey out on a date.  But flattered as she is by this handsome man with a strong career ahead of him, Audrey can’t stop thinking of James. She and James reconnect and admit their love and commitment for one another shortly before James goes into action, is shot down, and classified as missing even after the war is declared over. Audrey, though, doesn’t give up, knowing that James would do everything he could to stay alive and return to her.

I really liked the character of Audrey. She definitely came across as someone strong and capable – the sort of woman we expect to find as a WASP. Her friends in the WASP program are a mix of qualified pilots and giggly girls thinking about men – which we need because, of course, Audrey is committed to her job and her future plans and doesn’t have any experience with men and she needs the nudges from the other girls. But her pattern of committing to something stays true when she commits to James and doesn’t let up even when all others would move on.

The historical aspects to this book were very well researched and brought to the story.  So much so that I am definitely interested in learning more about the WASP program and the women who flew in it.

The story is pretty straight-forward romance with a plot that can likely be found in almost any romance … shy, inexperienced girl meets guy, doesn’t want to feel anything for him but can’t help herself, throws herself into commitment despite the odds against them.

If you like this kind of romance then you should definitely enjoy this book because author Noelle Salazar writes it well. But even if you don’t normally enjoy a romance (or think that you don’t) then you still might want to give this a read because the historical aspect should hold your interest.

Looking for a good book? The Flight Girls by Noelle Salazar is a gentle romance with a strong female protagonist in a remarkable historical setting.