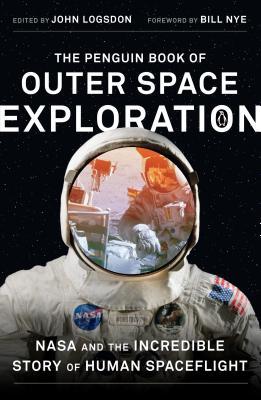 It is pretty hard to miss the fact that we are currently celebrating the 50th anniversary of the first crewed moon landing (July 20, 1969).  There are abundant films, books, and memorabilia celebrating this feat. The Penguin Book of Outer Space Exploration is certainly timed to coincide with this anniversary, though it explores a much wider range than just the lunar landing(s).

Editor John Logsdon has pulled together select items that chronicle the United States’ space exploration, from inception to infancy to today’s hopes for the private sector exploration.

We can read history’s and first-hand accounts from any number of participants in the space age infancy since we still are in its infancy, but what this does differently is give us direct access to the thoughts and planning and politics behind the events.

Starting with articles published in Collier’s magazine as early as 1952 and an article in 1954 written by Wernher von Braun titled “Can We Get to Mars?,” we get all the way to 2016 and Elon Musk’s address to the International Astronautical Congress, “Making Humans a Multi-Planetary Species.” Some of the most interesting pieces included in the book, from a political standpoint, are tape recording transcripts from the Nixon Whitehouse and we see just how much NASA and the future of space exploration relied on political ambition:

Nixon: Space, what’s the problem here?
Ehrlichman: Well the problem here is do we go ahead with the
next two shots [Apollo 16 and 17]?
Nixon: No! If we go, no shots before the election.
Ehrlichman: Then what would we do with all those employees?
Nixon: For those shots? How many, George?
Shultz: 17,500 or something like that.
Nixon: I don’t like the feeling of space shots between now and
the election.
Ehrlichman: But thinking of this thing [the space program] in
just pure job terms, it is a hell of a job creator.
…
Nixon: I only see a minor waste of money. Keep the people on,
but don’t make the shots. I just don’t feel the shots are a big
deal at this time
. . . There is also the risk you could have another
Apollo 13
. . . That would be the worst thing we could
have
. . . We are just not going to do it. There will not be any
launches between now and the election. The last shot, fine.
Let’s go forward with the last shot.

This political maneuvering – how our government has used the space program for political/party gain – certainly doesn’t come as a surprise, but it’s fascinating to actually follow.

I also quite liked the debriefing reports.  From the astronauts on various voyages as well as the occasional technical debriefing.  This generally straightforward reporting of a flight is a side that the layman generally doesn’t see.

And all along the savvy reader will come away with anecdotes to share with friends.  My favorite was learning that the Apollo 11 astronauts, after coming back to Earth and being picked up by the recovery ship and sitting through quarantine (we had no idea what alien microbes might have been picked up at that time) – on arriving in Hawaii, the astronauts flew back to Texas … and had to go through customs!

Looking for a good book? The Penguin Book of Outer Space, edited by John Logsdon is a must-read for anyone with an interest in mankind’s adventure in space, and a perfect gift for anyone you might want to get interested in space exploration.

The Penguin Book of Outer Space Exploration: NASA and the Incredible Story of Human Spaceflight