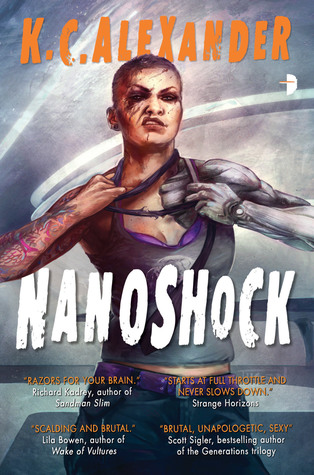 I gave a really great review to the first book in this (“SINless”) series. In fact I gave a rare five out of five stars to the first book (see review here). So I am tremendously disappointed to write a review that is so significantly less than stellar.

Riko, the street-tough, rough-around-the-edges non-hero cyborg hasn’t changed too much except now every street rat who wants to raise their own status figures that the easy way to do it is to take Riko down.  But Riko is still tough as nails and she’s got some things to prove and her good name to restore … well, maybe not a good name, but she can’t afford to lose any credibility. She takes a corporate job, expecting to get shafted, and not disappointed, but she needs the opportunity and not many others are giving it to her since the murder of her lover and companion.

There’s no finesse with Riko, just in-your-face attacking, but then that’s why she’s hired, isn’t it?

The book starts off with one of the most outrageous (and shocking?) sentences I’ve come across and it really does set the tone for what will be in the book (warning…devout Catholics, you may not approve). But it instantly reminded me why I liked the first book so much (the character of Riko) and I was excited to get inside this volume.

Well, not exactly nothing, of course, but nothing worthwhile.

The character really hasn’t changed much from the last book.  She was a curse machine then too, but she was surrounded with purpose and her mouth reflected her reactions to what was happening.  Here her mouth is what is happening and that just doesn’t work.  It grows tiresome quickly when there’s not much else to read about.

In the first book Riko was an anti-hero who had to rise above what was expected of her in order to climb out of the problems around her. Here she appears determined to remind the reader that she’s not a hero and she does everything she can to stay down among the dirt, even though she says she wants to rise above it.  It’s kind of the opposite of that first book, which is appropriate since my reaction is pretty much the opposite as well.

Riko was a fresh (if vulgar) face in Alexander’s first book in the series and I was really hooked, but this was a real let-down.  Where, I wonder, will the third volume fall…?

Looking for a good book? Nanoshock by K. C. Alexander is the second book in the SINless series and the main character is every bit as rude and ruthless as she was in the first volume but here she’s without purpose and the character wears thin.