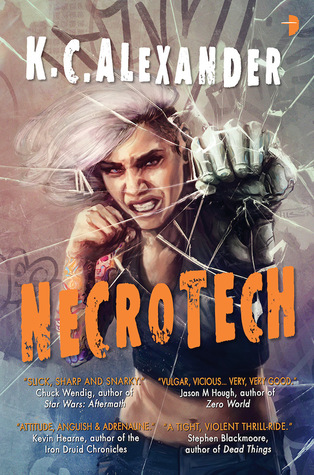 I’ve written before how much I am enjoying the Angry Robot (publisher) titles.  It’s a great publisher putting out stunning titles by some relatively new names in the science fiction/fantasy genre.  They are taking some risks and most of them seem to be paying off.  One of the general themes I’m detecting among the more science fiction related titles is a focus on technology gone awry.  Not a new theme in sci-fi, for sure, but one that’s being addressed with gusto at Angry Robot.

K. C. Alexander’s Necrotech is one of the latest titles in the tech-gone-wrong theme, and like many of the others, it’s a high-octane-action-fueled thriller.

Picture zombie’s, but not the viral, brain-eating kind that haunt the pages of most books, but zombie created from a technical infestation (“necro-tech”). Now imagine a female street thug named Riko who is a cyborg, with some pretty impressive tech of her own.  Someone messed with Riko’s girlfriend, turning her into a necrotech, and Riko has a memory loss of the time period.  Riko is pursued and captured by some corporate thugs and strong-armed into leading a team of fighters into a heavily infested community to retrieve some necrotech data. Riko doesn’t exactly trust the corporate thugs, and her team doesn’t quite trust her.  What could go wrong?

This book is a kick-ass thriller and Riko is a smart-mouthed, independent fighter who, despite her outward demeanor, loves human contact (sex) – male, female, it doesn’t matter.

The tech is well described and plausible and the action so intense you’ll need to put the book down to take a breather because K. C. Alexander doesn’t give you much during the course of the story.

But what really makes this story sizzle is Riko.  She’s the pretty classic ‘non-hero’ type.  She’s rough and edgy and just trying to survive when she’s thrust into a leader/heroine role.  But the rough edges on Riko feel more genuine than a lot of non-hero characters, and her passion for men and women actually humanizes her.  She’s got some secrets surrounding her awesome tech – so secretive is she about it that she won’t allow herself to be given a thorough examination.  This secret, of course, is part of what will make us come back to the next book.  But I suspect that even if there weren’t some secrets there, we’d want to, just based on Alexander’s presentation of the story.  It is so easy to get caught up in this and to feel the thrills.

Looking for a good book? If you like solid sci-fi with a great deal of action, then you’ll want to put Necrotech, by K. C. Alexander at the top of your reading list.