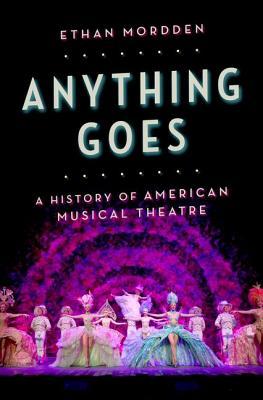 I’m pretty much a sucker for any book about musical theatre.  Who doesn’t love, singing, dancing, colorful costumes and lights, fantastic sets, and a rousing good story?  Of course, musical theatre hasn’t always been just that, and author Ethan Mordden explores the history of this American institution in this book, Anything Goes.

I definitely learned a thing or two through this book and I would not consider this light, casual reading.  One must really be a fan of the subject and probably already fairly knowledgeable, otherwise some of the names won’t mean anything.

The book is subtitled “A History of American Musical Theatre” but Mordden is quite selective in giving us the history. In fact, more often than not this book comes across as reflections on historic theatre rather than a history of the musical theatre.

The most difficult aspect of this book, however, is the author’s voice.  Over and over I highlighted passages in my Kindle version that annoyed me or drove me crazy with the author’s bias or, as I referred to it once “cattiness” (in writing about Sondheim, Mordden writes: “Rule Two: Marry smart lyrics to tuneless music, and if Jerry Herman complains, tell him, “My art’s longer than your art.””).

I think that in a history book, even a book about Musical Theatre, I prefer a less overt personality. Mordden often comes across as trying to be so clever, letting us know HE gets the inside joke (did he really need to share the idea that Sweet Charity managed to sneak in a smutty joke?).  I think it’s pretty clear what Mordden thinks of revivals and re-workings of classic tunes into new stories:

When Broadway needs to re-employ old music in show after show, it is reaching senility. In the past, authors quoted their hits as acts of desperation … By the 1970’s, however, Broadway was quoting entire old scores in what has become a genre all its own: the revival.

Given Mordden’s definite voice throughout this book, I was greatly amused when he writes about other works of this kind he mentions The World of Musical Comedy by Stanley Green, and American Musical Theatre: A Chronicle by Gerald Bordman and says: “Unlike the dispassionate Green, Bordman had not only fun but opinions.”  Mordden, too, definitely has opinions.

I’ve since gone to look at this book on Goodreads and I note that even in the description of the book, usually posted by the publisher, it says “narrated in Mordden’s famously witty, scholarly, and conversational style.”  ‘Witty’ is certainly up for debate, but if the author’s voice is sharp enough to bear mentioning in the book’s description, then it’s clearly going to come across when you read this.  The danger is that some of us aren’t going to enjoy that voice.  Which is too bad since there is some useful information here for the musical theatre fans.

Looking for a good book? Anything Goes by Ethan Mordden is an interesting look at the history of musical theatre but the author’s voice will just as likely put you off than draw you in.

Anything Goes: A History of American Musical Theatre