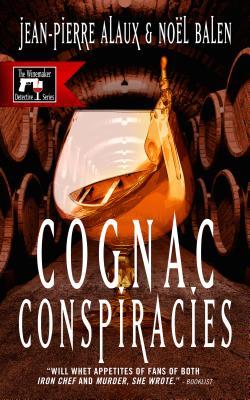 One of the oldest Cognac estates in all of France is potentially facing a hostile take-over by foreigners. The renowned wine expert, Benjamin Cooker, is brought in to look over the books but he discovers much more than a hostile take-over when he is met with constant stalling and state officials, as well as running into his first love. A drowning sets the community on edge and Cooker and his first love investigate.

I will admit that I put off reading this book because I really haven’t been able to get into this series. The concept of mysteries and vineyards really appealed to me even though when I first requested this book I hadn’t had much experience reading mysteries. And while I’ve developed my palette for mysteries, just like certain wines, this doesn’t taste good to me.

The story seems to revolve around Cooker’s first love (now a widow with a child) more than it does the take-over aspect. This might be okay if I felt that the two different plots connected better but I was frankly bored with what was happening and really just wanted the book to end.

I also felt like the resolution to the mystery was a lucky accident.  Certainly these things happen, but in a book series it would be nice to have a little more detective work result in the discovery.

I think that some of my personal disinterest in this series is cultural, not having read much French literature and understanding what might be a French method of story-telling. And some of it could be the translation not capturing the energy of the characters in a manner that would draw me in. It also falls into the ‘cozy’ mystery genre, which I’ve found I generally don’t care for. Whatever the answer, this just doesn’t appeal.

Looking for a good book? Cognac Conspiracies by Jean-Pierre Alaux and Noël Balen is as calm and relaxing as an evening sipping cognac … but that’s not what most of us are looking for in a mystery.