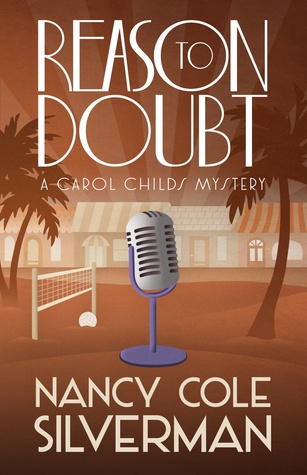 Nancy Cole Silverman’s Carol Childs Mystery series just keeps getting better and better. In Reason to Doubt, Carol faces a parenting nightmare when her daughter’s boyfriend – an apparently serious, staying-overnight boyfriend – is accused of some grisly co-ed murders. Carol gets a look at some of the preliminary evidence and it definitely points to the boyfriend. But her daughter doesn’t believe it and asks Carol to prove him innocent.

Silverman brings us into the story by making it personal. Almost any parent can recognize the desire to protect a child – to keep a child safe from danger … even an adult child. But at the same time, trying to find that balance between protecting and being over-bearing. It seems even more difficult when your job brings you closer to the story. Carol Childs has to balance not only her concern for her daughter, but her objectivity with her job as well.  How does she report about the girlfriend of the prime suspect when that person is her daughter?

The mystery is well put-together – as we have come to expect from Silverman.  The evidence does seem overwhelming against the boyfriend and it’s only Childs’ determination to help her daughter that keeps her poking in to other leads when the police and DA are sure they’ve got their man.

A side plot (more than just a sub-plot) has a couple of female witnesses, who want to stay out of the police light, give Childs some clues, but a mystery around them seems almost as intense. And of course it all comes together.

I’m enjoying this series. What at first started out as a pretty light mystery read has developed into some strong, heavy mysteries. Fans of the mystery genre should definitely get in on this. I would consider this border-line ‘cozy’ with some intensity.

Looking for a good book? Reason to Doubt is a strong showing in the Carol Childs Mystery series by Nancy Cole Silverman.