A BREACH IN THE HEAVENS – N.S. Dolkart 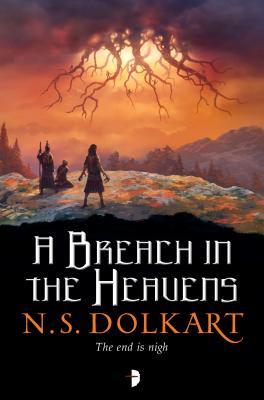 A Breach in the Heavens concludes N.S. Dolkart’s Godserf’s trilogy. This trilogy took me by surprise and carried me on a mostly thrilling adventure.

Phaedra is a sorceress and has one goal in life – to keep the world of humans and the world of elves apart. That shouldn’t be so hard, right? Except…if it was easy, there wouldn’t be a story here. When the sky trembles, it looks like Phaedra’s life work might have been for nothing.

There is such a fine line when  writing a series of this sort … how much story do you repeat from the previous books for those new readers who haven’t read anything prior to this as compared to retelling too much and boring the readers who have been with you all along?  In this case it feels as though almost a third of the book is making sure the reader is caught up on the story. It’s not total nostalgia – there’s a fair amount of moaning and complaining going on as well.  It was almost like a YA novel full of angst.

But Dolkart’s strength through the first two books has been a series of action moments surrounded by strong, unique characters and he gets back to that once he’s done brooding and the majority of the book easily reminds us why we enjoyed the series in the first place.

I miss the coming-together camaraderie that really hooked me in the first book, but there were more signs of it here than in the previous volume at least.

The emphasis here was clearly on Phaedra and her mission and I lost track or caring for a couple of the other characters that I’d initially grown attached to. Some of it comes together, some of it doesn’t quite so much, but overall it’s a remarkable trilogy.

For those who enjoy fantasies with elves – these aren’t like any elves you’ve read about before.

Looking for a good book? A Breach in the Heavens finishes off the Godserfs trilogy by N.S. Dolkart. It’s still got plenty of action and thrilling story-telling but falls just slightly short of being the outstanding book it could have been.

A Breach in the Heavens