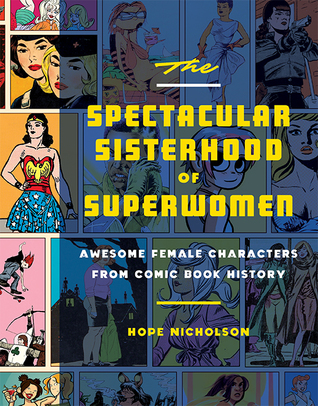 Of course this isn’t, technically speaking, a graphic novel, so why should I include a review during my Graphic Novel Week? As the subtitle boasts: “Awesome female characters from comic book history.” Every character mentioned here comes from comics, whether strips or books, print or digital, and comics of course, are the root of the graphic novel.

Hope Nicholson’s The Spectacular Sisterhood of Superwomen is an astounding historical look at some of the stronger female characters to appear in comics since the 1930’s. Not all of them are “superwomen” – as in, a hero with super powers – but all should be considered “super women.” The collection is culled by Nicholson, a publisher and comics fan, and is certainly somewhat subjective, but the research here … the uncovering of some old and often forgotten characters is really tremendous. I’ve highlighted a good number of these characters with the intentions of looking to read their adventures.  Unfortunately most of them published before 2000 are not reprinted and difficult to find (which makes it more interesting to get this glimpse of them).

But as with nearly any collection of this sort, those of us with even a modest, minimum knowledge of comics will wonder why some are included and others are not.  Where’s Veronica from the Archie comics, if Little Lulu is the “Hero of the Decade” for the 1930’s? And Barbarella and Vampirella make the list, but Storm and Kitty Pryde of the X-Men don’t?

In some cases Nicholson seems to go for the obscure over the famous – though not always.  We still get Ms. Marvel (times two) and Batgirl and Witchblade and Silk Spectre.  We even get Maika Halfwolf from the graphic novel/comics series Monstress (volume two just won a Hugo Award this week as I write this) which shows how current Nicholson is on her reading.

I enjoyed learning about a lot more strong female characters in what I have always perceived as a male market (Nicholson puts that into perspective as well) and the history of the characters, and why Nicholson believes they are strong characters, despite (sometimes) being overly sexualized in appearance or character.

Part of what makes this such a delightful read is Nicholson’s casual, friendly demeanor in her writing style.  Her commentary (I almost consider them ‘asides’) are usually sarcastically fun (“I guess reading tales about making our with your dead best friend’s husband is fun for the whole family”).

I’m not sure that I’m interested in knowing more about all the characters revealed here (“One story features Nibbil engaging in balloon sex – that is, sex with word balloons”), but my interest is piqued with most of these superwomen.  Thanks, Hope Nicholson, and I’ll look forward to a Volume 2!

Looking for a good book? The Spectacular Sisterhood of Superwomen by Hope Nicholson is a wonderful history of strong women in comics from the 1930’s to today.