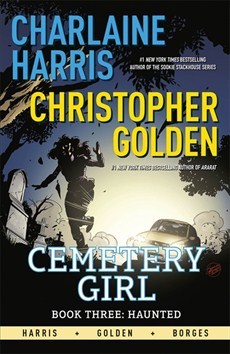 I am not wildly familiar with Charlaine Harris’ different supernatural worlds or characters.  I’ve read a few of the Sookie Stackhouse books and a graphic novel or two based on some of her characters – such as this one, Cemetery Girl – but I otherwise don’t really know these characters.

Some people refer to her as The Ghost of Dunhill Cemetery, others refer to her as Cemetery Girl. Both are accurate. Her given name, when she was alive, was Calexa Rose Dunhill but she doesn’t remember it. All she can remember is that someone tried to kill her (and apparently succeeded) and dumped her body and left her for dead. Is she really dead?  Is she alive?  Or is she something in between the two?  There is a man named Salazar searching for her and he holds the secrets to her past.

Meanwhile, in her something-in-between state, Calexa has an ability to capture the spirit of someone who has been killed near her. At these times she is both people and the Calexa part of her tries to help the other soul by solving her murder.

I had not read the other two books in the series and I was definitely lost at first.  I had to read some of the Goodreads summary of the story to understand Calexa’s history in order for the story to make sense to me.  It’s definitely the sort of book series that you can not come into part-way through.

Once I understood what was happening, I enjoyed the story. It is an interesting concept that has lots of possibilities and author Christopher Golden works this nicely. But as a book … on its own …?  No.  Sorry.  It’s just confusing. But apparently Dynamite publisher is pretty proud of it because you can read the entire story twice!  That’s right! Two of the same thing for just one price!  My digital copy of this book contains the 120 page graphic novel and the approximately 100 page script for the entire book.

At one time, including a script, or a portion of a script was new and unique and a great way for future graphic novel authors and artists to see the way a story is put together.  Now it’s pretty standard it seems, though I can’t remember a case where you get the exact same story twice. Usually it’s a sample of script along with some art sketches.

To be fair, I notice on Goodreads that the book only shows the actual graphic novel number of pages.

The artwork is fair.  It is not outstanding but not the worst I’ve seen in the past few years.  At times it was a bit muddy and I wonder if that’s a problem with the ARC digital copy, or if that’s just the style.

Looking for a good book?  Haunted, Charlaine Harris’ Cemetery Girl #3 graphic novel by Christopher Golden is a nicely written tale, but it is vital to read all three parts to know what is happening and who the characters are so it doesn’t work well as an individual book.