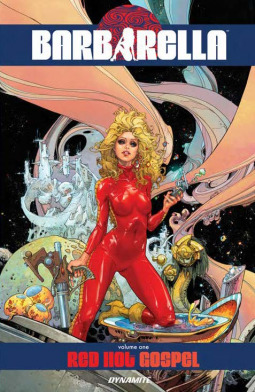 Originally created by Jean-Claude Forest and published serially in France in the early 1960’s, Barbarella represented the liberated future woman – free to enjoy sex on her own terms … which she did. Liberally. It was, of course, considered scandalous and pornographic at the time, so of course Hollywood made a movie of it.  Now, Dynamite Entertainment has brought Barbarella back into the pages of comics and graphic novels and she’s more than just a sexually liberated women.  She is intelligent and feisty, fighting back against oppression.

This volume contains four stories.  The first three stories are one story arc in which Barbarella lands on a religiously repressive planet – one in which an individual’s sexual organs are confiscated because sex and sexual desire are bad, of course.  She is sent to a holding cell to await her punishment where she meets a cyborg woman also waiting for her punishment.  The two get along fabulously.  Quite fabulously, if you catch my drift, and escape their cell and set the religious community back by seeding the planet with thoughts of desire.

The allegory here, to our own fight against religious oppression, is a little too obvious.  We don’t have to work too hard to see what writer Mike Carey is saying. However, Carey tells the story nicely and it’s a delightful, delicious ride with our favorite futuristic, liberated sexpot.

And surprisingly enough, especially given Dynamite’s penchant for giving us females who are often overly exaggerated in appearance, both the story and the art are rather tastefully done.  Barbarella may be engaging in a lesbian encounter with the cyborg woman, and there is nudity in the artwork, I still feel the ’68 movie was more graphic in nature.

The fourth story in the collection is interesting.  In part it is a complete, short story, and in part in feels like the beginning to something larger.  Here Barbarella plays a bit of a detective and we don’t have nearly the same feel for her sexuality.  She could be any character, male or female, given the role she plays.  If it’s going to be Barbarella, why not give it a reason to be her?  The artwork is not bad, but it’s darker and heavier, giving it a very different quality than the longer story.  I actually think that the art is ‘better’ here than in the longer story, but that it is inked so differently that it comes across as weaker.

Looking for a good book? Barbarella, Vol.1 is a graphic novel that brings back the 1960’s character of Barbarella and shows that while she is still enjoying her sexual freedom, she is more than just a sex kitten in space.  it is worth reading.