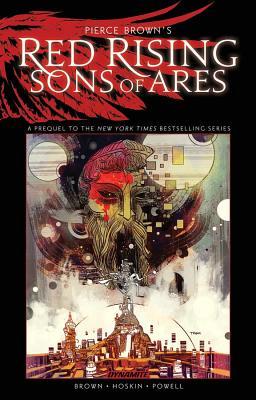 I’m a little bit behind on my Red Rising series reading (though I’m currently working on correcting that) and I’d hoped that this might help me out and round out a few things for me.  And it does.  In many ways this is a prequel to the series as it lays out the story of a ‘gold’ who has fallen in love and had a child with a ‘red’.  For those not familiar with the series (and you might want to be before going in to this) there is a caste system in place with the different castes being identified by their color.  Red is about as low as you can get, while Gold, of course, reigns supreme.

The story is pretty dark and violent and that’s certainly an aspect of the one book that I read, but it’s not the only trait in the book, whereas it dominates the mood and tone in this graphic novel. Still this is a story of uprising in a caste system, so violent action is to be expected. Writer Rik Hoskin does a decent job, considering he’s playing in someone else’s world with someone else’s characters and laying out a prequel.

But this is a graphic novel and the art is just as important to telling the story as the writing and here the story absolutely falls apart.

I am giving artist Eli Powell the benefit of the doubt as to his skills and assume that he’s going for a tone, similar to Hoskin’s dark story-telling, trying to convey the seriousness of the action with plenty of dark shadows and harshly drawn figures.  But it doesn’t work. (It rarely works, in my opinion.)

Instead we get a drawn story in which it is nearly impossible to tell the different characters apart and everything looks like a quickly made sketch rather than a carefully inked finished project.  The dark, slashing shadows at or under a character’s mouth was driving me crazy by the end of the book.

I’m not sure the purpose of this style, but it’s definitely one that I don’t care for and it really took me away from the story itself.