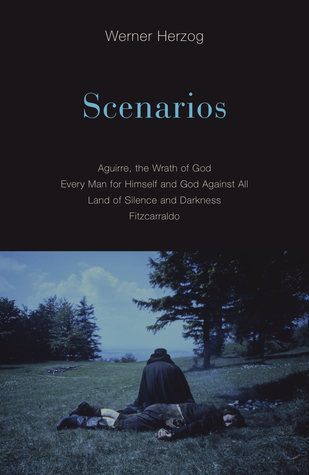 If you don’t know Werner Herzog’s films you should correct that right away. You’ll be in for a treat, but don’t expect to see your average blockbuster type movie. Herzog is an artist and his films tend to be powerful stories of ordinary people attempting something extraordinary.

This book contains the texts for four of Herzog’s films: Aguirre, the Wrath of God; Every Man for Himself and God Against All; Land of Silence and Darkness; Fitzcarraldo. In his introduction, written in 1977, Herzog writes, “The texts in this volume have remained completely unchanged, in the same shape they were before shooting started.” But the student of film studies will note that these screenplays don’t read anything like what you might expect when you’re reading a screenplay by William Goldman or any modern screenplay.

These screenplays read like stories, and in a very confounded sort of way, they are quite visual and it’s easy to see the film as you read through this.  It’s an interesting way to write a film script, but it clearly works for Herzog and it gives us two opportunities to enjoy his work – as films and as stories (or ‘scenarios’).

I faintly remember seeing Fitzcarraldo in the mid-to-late 1980’s, but now, having enjoyed these works as stories, I really want to see all four films and see how they compare to these narratives.  In his introduction Herzog notes that the films “followed a very different evolution.”

It is a real treat that the University of Minnesota Press has published this collection.  Herzog shows here that he is a creative dreamer and that his dreams take shape in various art forms.  The films are most obvious, but these scenarios show that I wouldn’t mind sitting down and reading Herzog’s writing as he tells a story with words better than most.

Looking for a good book? Scenarios by Werner Herzog is a unique collection of four film stories by Herzog, written in a narrative, novella format, but every bit as wonderful as the films.

Scenarios: Aguirre, the Wrath of God; Every Man for Himself and God Against All; Land of Silence and Darkness; Fitzcarraldo