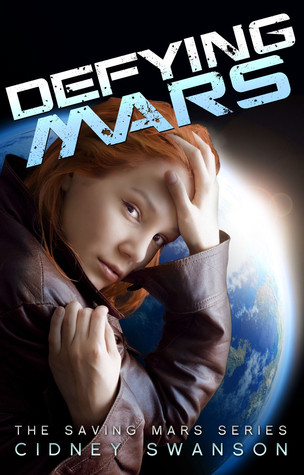 I read a lot of books and I get them from a variety of sources.  In addition to ARCs and my visits to the library (I’m a library board director) I scour the on-line book community for free and sale-priced books.  It was in this way that I first came across author Cidney Swanson and the book Saving Mars.  Self-published or small-press books don’t always have a very good reputation (and often for good reason), but once in a while an author or book rises above the rest.  Cidney Swanson is one of those authors whose talent far exceeds the perceptions of  self-published authors.

Defying Mars follows up on what had started in Saving Mars (see my review here).

Jessamyn, a teenage Marsian pilot, is leaving Earth with food and supplies, having completed a clandestine operation to help her home planet (Mars).  But the operation was only a partial success.  Jessamyn leaves behind her brother Ethan and an Earther young man, Pavel, who helped Jess and her mechanic, Crusty, escape the planet, and left Jess with a kiss that has her head swimming.

Having fulfilled her duties, Jess begins to discover herself a little more and realizes that she is capable of more than what most adults would give her credit for, and she begins to get a little more defiant, standing up for what she believes is right – but that doesn’t always make for easy associations.

Although the perceived relationship with Pavel takes high priority in Jess’s mind, the young man doesn’t figure in quite as much in this book as he did in the previous, but the door is open for a much tighter connection in future books.

Swanson writes thrilling, motivating YA.  Her characters behave like bright teens who are becoming adults should behave, and youngsters should be able to see a bit of themselves and what they want to be in these characters.  I’m only two books in but I’m impressed with this series and with Swanson.

Looking for a good book? Defying Mars by Cidney Swanson is the second book in the Saving Mars series and is a thrilling, sci-fi YA with characters that readers will enjoy.