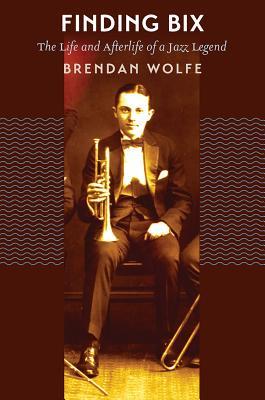 I first became aware of Bix Beiderbecke when I heard him on a tune played on Public Radio and I immediately went out to purchase a few CDs that featured his horn.  I enjoy listening to a Beiderbecke song, but part of that comes from the fact that I’ve been a fan of jazz music since I started listening to music (closing in on half a century). I would not consider myself to be a Bix fanatic, however.

I was expecting this to be a Bix Beiderbecke biography – it’s sub-titled “The Life and Afterlife of a Jazz Legend” after all – but it’s not quite a biography … and it’s a little more than a biography?  Mysterious?  Yeah … so was Bix.

What author Brendan Wolfe appears to do is track down all the various things written (and said) about Bix and put them into perspective – separating fact from myth as much as possible.  This seems to be a tremendous challenge because Bix was a bag of contradiction and an empty canvas (except when he was playing).  In fact the descriptions that stood out to me were when he was described with a blank expression.

“It was only when I looked at his face,” (guitar player Eddie) Condon wrote, “and saw the absence there that things got cold and tight around me and I stiffened my drink.”
The same blank expression – what Condon described as “the absence” and what (Ralph) Berton dubbed his “private astronomy”- that marked Bix…. We can’t help but wonder where he’s off to and, if we could, would we want to follow him there?

Later Wolfe clever writes: “But he had stopped listening, his face now a Bixian shade of blank.”

What we discover through Wolfe’s book is that Bix was an enigma – which does not deter (maybe even helps) his legion of fans. Convention/conferences/festivals take place annually in honor of this musician who burned out in his late 20’s almost 90 years ago. Wolfe attends a Bix-Fest in Racine, WI where fans re-enact Bix and Hoagy Carmichael listening to The Firebird Suite. To his fans, Bix was a living legend – a god – and they have an explanation for everything or willing denial for anything too terrible.

But I think the best analysis of Bix comes from jazz pianist and Bixophile Brad Kay who Wolfe quotes:

I think the reason why Bix Beiderbecke is the most punctiliously documented jazz musician is precisely because he was so slippery and indefinable as a person. … Who he was doesn’t really matter a bit as far as I’m concerned. I mean, he was a poor, confused guy who was in the grip of a demon somehow. … He was simply possessed by the music. It dwelled in him. It was an entity. It was above and beyond, separate from and not connected to any real human life.

…Bix, even at the end, sat at the piano and played the same incredible, marvelous, inventive, original stuff, and then (Eddie) Condon looked at his face and he saw the absence there, the dead eyes. … And it’s easy to see why legends accrue to him because you know he was definitely in the grip of something. he was staring into space. The music was just coursing through him and volition, desire, a definable goal – none of this had anything to do with that.

And Kay sums it up nicely: “He spent most of his life just trying to be a regular guy, which he was anything but.” And these descriptions offered up by Kay make the most sense and I wish Wolfe had ended his book with these keen insights.

But this is the biggest problem with the book … the random revelations. Wolfe gives the reader the story in chronological order … not chronological in terms of Bix’s life, but in terms of what Wolfe discovered and when.  Or so it seems at least. And this takes us on some strange tangents.  Wolfe even recognizes this. “Admittedly, I’ve lost the thread of our narrative a bit” he writes, early on in the book.

The information here about Bix Beiderbecke was quite interesting, but the relating of it was too much of a jumble to really have the impact that could have had.

Looking for a good book? Finding Bix by Brendan Wolfe is an interesting look at how a legend is created when biographical information is difficult to come by and often contradictory. The book examines other sources and personal insight, but the narrative is as jumbled as Bix’s life.

All quotes come from an Advance Reader’s copy of the book and the published edition may reflect changes, corrections, or updates.

Finding Bix: The Life and Afterlife of a Jazz Legend