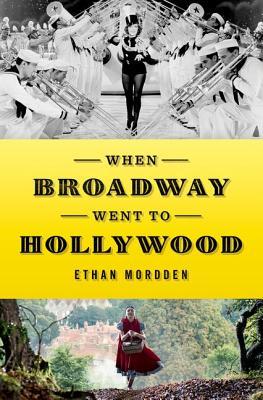 This book really really needs a sub-title to let the reader know what the focus is, because this is just a little bit misleading.  This book examines the transformation of the songs and the songwriters (music and lyrics) of the Hollywood musical when their work was being courted by Hollywood.  That’s just a little bit different concept than the generic ‘Broadway to Hollywood’ theme.

That said, author Ethan Mordden offers up some interesting tidbits that might make one pause to reflect if the reader is as interested in the ‘Musical’ as an art form, such as I am.  But given the tighter focus of the book, it’s a pretty narrow readership I would think.

While I consider myself a fan of the genre, I would not presume to think of myself as particularly knowledgeable about it, other than what I enjoy listening to and watching.  Mordden clearly has a passion and knowledge about the men (and women) who’ve made this journey and has done a respectable amount of research and condenses it to give the reader a rather thorough picture of how Hollywood capitalized on the Broadway respectability.

Mordden’s style is very casual and – well – unfiltered.  Mordden doesn’t separate fact from opinion very much, blending the one to the other, and vice versa.  Take, for instance, this passage:

“Let’s Call the Whole Thing Off” (the “you say eether and I say aither” song) isn’t especially innovative, but “They Can’t Take That Away From Me,” Astaire’s solo, is masterly in the way the melody smoothes its way over startling harmonic changes. This is Harms creativity at its height, as far from Tin Pan Alley as a composer can get while respecting the limits of pop. Yet George does it so suavely that a Hollywood producer, by nature wary of too much New York “cleverness,” would be not dubious but entranced. Then, too, Astaire’s way with a song is as artless as his dancing is elaborated. This is pop music experimenting while pretending it isn’t.

Anyone want to pick out the fact from the opinion here?  Clearly Mordden is not afraid to share his opinion, but given his knowledge in the area, we bear with it, even if we don’t always agree with it.  He also comes up with little gems that make you appreciate his personal take while being annoyed with it at the same time.  Take this quick passage:

By the 1950’s, operetta had turned zombie in New York. Except for the sexy Kismet (and some might say Candide, though the latter scoffs at operetta’s essential component, romantic longing), the form was walking dead, still around after its life was over.

His snarky comments make it fun to keep reading. In writing about Camelot, Mordden comments:

Franco Nero, the Lancelot, also wanted to do his own singing, and let us say that, as a singer, he looked splendid … The only genuine vocal tone we hear from a lead is that of Gene Merlino, and he isn’t in the movie: he dubbed Nero.

One thing that was noticeable and rather interesting, was how we spend almost as much time on some of the talent that isn’t as well-recognized as we do with the big names in the industry.  Johnny Mercer and Frank Loesser and Harold Arlen get almost as much time as the Gershwins or Rodgers and Hart.

I learned a few things (I think) and I generally found this to be an interesting read and anyone wanting to know more about the transfer of Broadway musicals to the big screen should find this a valuable read.

Looking for a good book?  When Broadway Went to Hollywood by Ethan Mordden is a narrow-focused book on the song-writing teams of Broadway musicals and their work in Hollywood that will prove interesting to those already attracted by the topic.

When Broadway Went to Hollywood