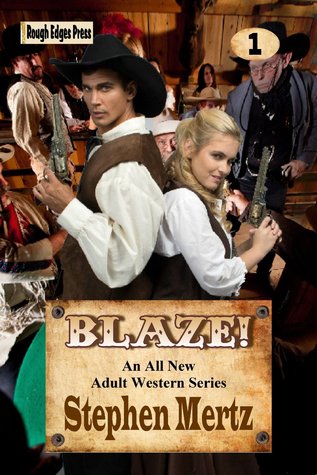 J.D. and Kate Blaze are gunfighters – two of the deadliest gunfighters the Old West has ever seen.  They also happen to be married and they create as much heat from their passion for one another as they do from gun-slinging.  The duo encounter an Apache ambush and are hired to track down a gang of outlaws.

This book moves at a rapid pace as the Blazes blaze through all sorts of danger.  We don’t spend much time getting to know the characters, but that’s okay … we’d probably be disappointed anyway – what’s there to know?  They’re young, have the hots for each other, and like to shoot and can do it well.  ‘Nuff said.

As one of the few remaining fans of westerns, I was poking around on Amazon to see what was new in the genre when I happened on this book.  I can’t say that I’m overly impressed, but it manages to satisfy the desire to read something quick, that doesn’t require a whole lot of thinking on my part.

Although set in the Old West, this doesn’t feel particularly old west-y. It feels very modern, just set in a different era.

I look forward to reading more in the series to see how other writers take on Kate and J.D.

Looking for a good book? Blaze! is a fast-action western by Stephen Mertz and should appeal to those who want a quick read, enjoy a little spice in their gun-powder, and can’t get enough sexy westerns.