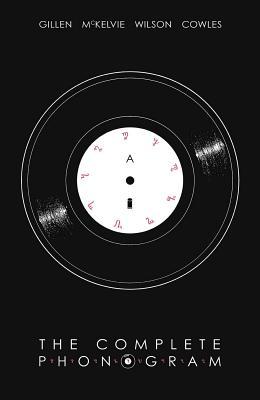 I read a fair number of graphic novels but I don’t subscribe to any online sites or magazines that keep me informed of comic book and graphic novel trends or releases. The ARCs I receive tend to be my only source  of information on what is out there. I’ve become pretty surprised at the quality of the graphic novels I’ve been reading and I’ve come across some unusual and stunning works.  Case in point: The Complete Phonogram.

This 500+ page volume is certainly not for the graphic novel newbie. This book collects a large body of work written by Kieron Gillen and illustrated by Jamie McKelvie, all centered around the pop music world. And magic.

Imagine being a phonomancer – a person with the ability to manipulate music – to create magic through sounds. Now follow these people with this ability as they weave through the world, spells of music being cast and relationships built and dashed to a soundtrack of magic.

I was instantly caught in the spell of this book and I really seemed to identify with one of our central characters, David Kohl, who has passed his prime in the industry but still holds a reputation and interest in the music scene.

The music scene here tends to be the British pop club scene, but, while it might offend the Brits to say so, it’s not really all that different from what I remember when I went to clubs on the Sunset Strip in Hollywood in the 1980’s.

The sense that there’s magic in music is not so far-fetched and this graphic novel takes that idea and pushes the envelope, making that magic just a little more real and a little more enticing.

The art here fits the story very nicely.  It’s not über realistic and it’s not overly stylized.  It’s something in-between that catches the theme and works well with it.

This book was a real surprise for me.  I knew nothing about it, but when I saw that it dealt with the music theme I knew it was something I wanted to look into.  The size of it (504 pages) was daunting, and it did take me awhile to get through it, but part of that was because I really wanted to be able to give it my full attention.

I’ll have to admit that there were times I didn’t entirely understand what was going and I’d have to backtrack – it usually involved magic and who was wielding it and why.

Overall, this was a really wonderful voyage into what graphic novels can be – full of wild and weird and fun ideas.  It is highly recommended.

Looking for a good book? The Complete Phonogram is a graphic novel that centers around music and magic and all that can happen within both, when humans are involved.  It is weird and delightful and absorbing.

I received a digital copy of this book from the publisher in exchange for an honest review.