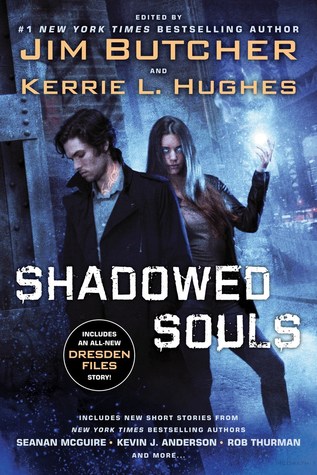 If you are a reader of urban fantasy you surely have at least heard of Jim Butcher and/or his ‘Dresden Files’ series.  This anthology of short stories is set in the Dresden Files universe (it’s even considered book #14.5) – but you aren’t likely to find Harry Dresden himself making an appearance.  Instead, other authors are given permission to romp in the Dresden playground with some of the other characters.

Kerri L. Hughes, co-editor of the volume, says in her introduction that she invited authors to write stories “based on the idea that good and evil are just two aspects of a complicated and very human story” and in his foreword, Butcher writes “A lot of the people in these stories … aren’t good. But they aren’t necessarily evil, either. They need to be where they are, doing what they do.”

And that’s a pretty interesting idea (though not wholly original).

As with almost any anthology, some of these stories were hits with me, and others really couldn’t keep my attention.

Three of these really stood head and shoulders above the rest.  Perhaps my favorite here (my Kindle note at the end reads “Damn this was good!”) was “Baggage” by Erik Scott de Bie.  I felt like I was right in the middle of the story, watching it slowly unfold around me.  It was absolutely tremendous.  I’ve never read anything by de Bie before this, but I will be looking for him now.

Also coming on above the rest of the pack was “Eye of Newt” by Kevin J. Anderson (imagine Jim Butcher, William Shakespeare, and ghosts getting together – it was fun and funny), and “What Dwells Within” by Lucy A. Snyder (how can you go wrong when your opening sentence is from a telepathic ferret?).  Jim Butcher’s “Cold Case” shows why he’s a popular writer.  He works the language so smoothly.

Most of the others were pretty average reads for me.  Seanan McGuire is one of the best voices in urban fantasy writing today, in my mind and although her story “Sleepover” didn’t knock me out, the way I was hoping, it’s still better than average., with Kristine Kathryn Rusch’s “Sales. Force.” being the only story that I really didn’t like.

This is definitely worth a read, especially if you are a fan of Butcher and/or his Dresden books.

Looking for a good book? Shadowed Souls is a collection of Dresden Files-related short stories edited by Jim Butcher and Kerrie L. Hughes and is a strong, worthwhile read.