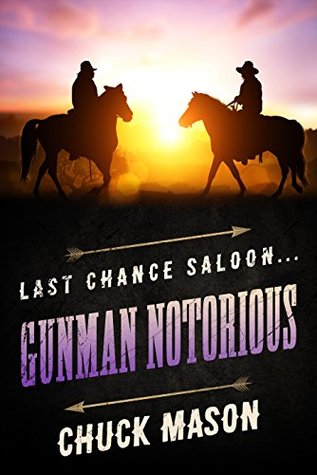 Max Kane was a notorious gunman for many years, but he’s trying to go straight and spend his time with his beautiful wife and children now.  But a reputation is hard to shake.

U.S. Deputy Hank Chase offers Kane a way to redeem himself for his past crimes.  The daughter of a millionaire has been kidnapped by the Cantrip gang.  Because of his gunman reputation, Kane needs to work his way in to the gang to rescue the young woman, Hannah Bell.  But Cantrip isn’t easily fooled and this won’t be an easy task for Kane.  But he’s committed to going straight, and this could be just what he needs to prove it.

I’m pretty sure I have not read anything by Chuck Mason before this, but I would look forward to reading more of his work if this book is a good example of his writing.  The story was well-developed and believable and our central character grew during the course of the book.

The action built nicely.  This wasn’t the sort of non-stop action book that we often find in Westerns, but that’s because this is a book that is built on character and story to turn pages, not one gunfire and action sequence after another.

The ending really typifies the Western hero and set Kane above the average gun-slinger.  A moral code to do what’s ‘right’ even if it means putting a bullet through a bad guy, while persevering  through unbelievable odds and weathering life-threatening injuries. Max Kane, in the hands of an author like Chuck Mason, is the sort of hero that you root for, despite a violent past.

It’s a short book and a quick read, but it’s more than just a little satisfying and definitely one to read.

Looking for a good book?  Chuck Mason’s Gunman Notorious is a notch above the shoot-’em-up Western novel, with a great central character and satisfying story.