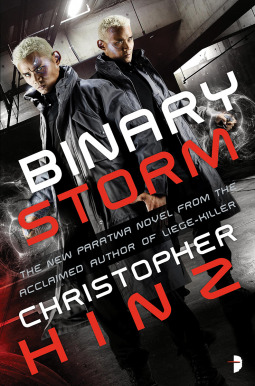 “Binaries” are genetically engineered assassins – twins inhabiting a single consciousness – in Christopher Hinz’s future world “Paratwa” saga. In Binary Storm, computer programmer Nick Smith and Annabel Bakana, the new director of an organization trying to control runaway tech growth, team up to combat binaries. But there’s a mole in the organization.  It’s not likely to be a binary because they aren’t able to withstand distance from one another for any length period of time. …unless they’ve overcome this obstacle in their genetic engineering?  But it could be a sympathizer – a binary wannabe.  In either case, it means trouble.

I was hooked from the very first pages of the story. Hinz sets us up with a really exciting action sequence which then leads into the introduction of the major characters and a description of what we’re up against (the binaries).  I wanted to know more and to know what would happen next and that desire to know never left – keeping me turning pages throughout.

And while the action is exhilarating it is the characters and the mystery at hand that really moves the story along.  Nick and Annabel are great protagonists working in an atmosphere of political and business intrigue with technology run amok and exemplified by the binaries.

Binary Storm is a prequel to Hinz’s Paratwa series which perhaps explains why there is as much set-up here as there is.  But I note that the three books making up the series after this prequel are by a different publisher, making me wonder if there will be more to come here with Angry Robot.

While the binaries still seem like a science fiction concept, everything else in the story feels frighteningly possible.

I’ve come away a fan of the author and the series, which I will now seek out.

Looking for a good book?  Binary Storm by Christopher Hinz is a fast-paced action/adventure mystery with some smart science fiction surrounding it and worth reading for fans of the genre.