Posted by Daniel on May 24, 2017
Posted in: Uncategorized, YA. Tagged: 2 Stars, Book Reviews, Books, Reviews, Young Adult. Leave a comment 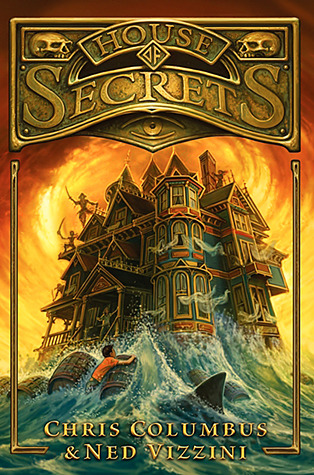 I definitely expected something a little … better … given Chris Columbus’ name on this.

The Walker family is moving.  Mr. Walker lost his job recently, under peculiar circumstances (something referred so often that I thought maybe this was the second of third in a series).  But when they see their new house, things really change.  The house is called The Kristoff House and was named for Denver Kristoff, a writer of peculiar stories.  But Kristoff’s stories aren’t the only that is peculiar… there’s a nosey neighbor and … well … a house that travels through realities.

The parents disappear and the three Walker children, inside the house, travel to strange lands where barbarians with swords fight WWI pilots, and dinosaurs threaten them all, until the house floats away, to be chased by pirates….

This book has plenty of action, but very little story.  I was only half way through the book when I rolled my eyes and wished that they could just get on with the plot and solve the … well, find the … actually, there is no plot.  The kids in the house are lost and they want to go home.  But nothing they come up against moves the story closer to getting home.  EVERYTHING is a sub-plot and it’s a confusing mess.  But because it moves quickly and there’s so much action, I think we’re not supposed to know that there’s no plot.

I liked that we discover that Denver Kristoff was writing about things that happened to him … places he visited, even though it seemed like pure fantasy.  This is a pretty nifty little reveal.  But still … it doesn’t go anywhere.  Columbus and Vizzini are caught up in action and trying to bring cool new ideas to life on the page (and Columbus probably visualizes the whole thing cinematically), but we stop caring when new idea after new idea leads nowhere.

I have absolutely zero interest in reading any more of the books in the series.

Looking for a good book?  House of Secrets, by Chris Columbus and Ned Vizzini is a wild action ride that goes nowhere, and takes a long time doing so.